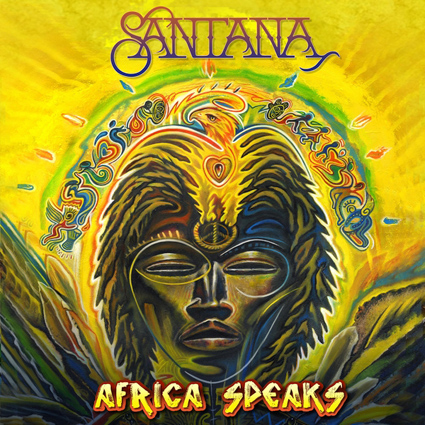 After getting past my initial focus on the pop elements and move away from the Latin sound, I came to absolutely appreciate this powerful new release from Santana. I admit to expecting more of their trademark Afro-Latin sound which has become so recognizable, but that lingers only somewhat on the bands 2019 release “Africa Speaks. Instead they have melded their identifying sound among many other styles on this slick production by Rick Rubin. The album has been condensed from a creative bounty of 49 songs, all recorded over ten days at Shangri-La in Malibu, many in a single take. The album title takes on the persona of the heavily inspired African melodies and polyrhythms performed by the blazing octet., fronted by Spain’s inimitable force of nature singer , songwriter, and poet Concha Buika.

I listened to the album several times on Tidal and found I absolutely enjoyed their latest release, becoming increasingly curious about the sound quality differences between a high resolution audio download version and the Master Quality Audio stream available to top tear Tidal subscribers. As an audiophile and a finance guy, I am faced with two realities; the music industry is best supported by direct sales of albums, often at a premium price for audiophiles, and my budget conscious mindset wherein for a flat monthly fee I can stream thousands of albums, many of them in high resolution, but in turn shortchange the music industry, which potentially could falter down the road due to lack of sales. So, when I noticed Africa Speaks was offered at a 20% discount on HD Tracks, I downloaded a copy to hear the difference for myself, choosing to better support music and determine just how good the Tidal MQA stream sounds compared to a 96k / 24-bit lossless file.

For the geeks, I downloaded the Wave files and converted them to FLAC using dbPowerAmp. I then uploaded those 96k / 24-bit stereo FLAC files to my local music server, which has an HDMI output connected to a Denon amp. I use FooBar2000 on a Windows 10 box to play the FLAC files and the Tidal desktop app on the same PC to stream (and play) the MQA files. Note that Tidal doesn’t define the source resolution, but they claim that the Master Quality Audio files are typically derived from 96k / 24-bit sources.

Now, here is what this article is all about – the actual difference in sound quality between Tidal and a downloadable lossless hi-res file. The short answer is there is a discernable difference, but for some listeners this may not warrant the premium paid to buy the hi-res version, leaving the flat monthly all-you-can-listen-too Tidal service as a great listening option. However, a true audiophile would seek the best quality copy available, and by all means that is the high-resolution download.

There is a distinct fullness to the deep bottom end when listening to the FLAC version, the MQA holds up very well, but just doesn’t extend those lows with a powerful richness heard on the FLAC wherein the kick really thumps and the bass grinds into the ground. Even the snare has a deeper thwack and the congas and yield a slightly more woody sound.
While the stereo field is nice and wide when listening to the MQA version, it lacks some air and a bit of depth that is present when hearing the FLAC version. Likewise, the tingle of the drum stick riding the cymbal becomes truly pronounced on the FLAC version.
Vocals also had a greater sense of airiness, and generally the musicality of the FLAC file was akin to having the band playing in my listening room, whereas the MQA felt like it was a partial step away, losing just a smidge of the life like sensation heard on the FLAC. Again these are minor subtleties that may not affect the listening experience for many fans, but the differences do exist and is readily apparent to those who notice such details.

I also have an Oppo 95, which I connect via analog cables to the Denon amp. Of course this is not an apples to apples comparison, as the digital to analog conversion process is different between the Oppo and the PC, however it is still worthy to note. For those with high quality DAC’s, it is likely you will hear a vast improvement over the MQA and even the FLAC files played via a PC. Such was the case for me, the Oppo provided yet another step up in clarity, yielding improved dynamics, detail, and transparency. Likewise, when using the 2-channel analog outputs converted by the built in SABRE ES9018 DAC, those same FLAC files dramatically came to life, taking my hi-res experience to a new level.

Africa Speaks is a welcome surprise in 2019, and apparently is the album Carlos Santana has been wishing to make for a couple of decades. Sadly, former label contracts had been restricting his creativity, thus he had been unable to make this music until Concord offered him complete artistic freedom. He, Buika, and the Santana band have clearly made the most of it.

Highly recommended for fans of Santana, audiophiles seeking top shelf recordings, and anyone who is adventurous enough and willing to travel the globe while listening from the comfort of their home.

FLAC / WAVE 2.0 96k / 24-bit download or via MQA Tidal streaming as reviewed. Also available on CD and Vinyl, or through Qobuz hi-res streaming.