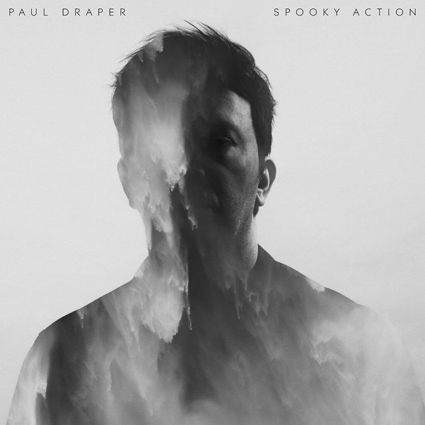 Best known as the lead singer with the pop British rock band Mansun, Paul Draper has released his first album titled “Spooky Action” on Kscope Records. Born in 1970 in Liverpool, England, Draper started playing guitar when he was 15. Joining forces with Carlton Hibbert, Dominic Chad, Stove King, and Mark Swinnerton they went onto form the band Mansun. They released three albums, and while working on their fourth, Draper was diagnosed with a rare form of cancer and unfortunately by the time he was better Mansun had broken up and their final album was scrapped.

Draper subsequently kept a low profile in the music business after Mansun broke up in 2003. He co-wrote a couple songs, produced an album or two, and during a radio interview in 2013 announced he had been working on some demos for a possible solo album. A couple of years later he signed with Kscope Records, and finally in August of 2017 fans can get their copies of his debut release, Spooky Action.

The album is Available as a deluxe 3 disc box set, featuring a DVD-V, with 5.1 DTS and Dolby Digital, and hi-res LPCM stereo, plus the album on CD, and a second disc containing bonus material. For analog enthusiasts, you can pick up a limited edition 180g clear vinyl version or the standard audiophile black vinyl version. Of course a stand alone CD is also available, and you may preview it on Spotify.

Spooky Action arises as an autobiography about friends, business and betrayal. Reading like a self-help revelations, song titles include “Jealousy is a Powerful Emotion”, “Friends Make the Worst Enemies”, and “You Don’t Really Know Someone ‘Til You Fall Out With Them.” He is quiet for the first three minutes of the opener “Don’t Poke The Bear,” but once Draper lets loose he doesn’t let up.

Fans will find Draper has picks one sound across the songs and primarily sticks to it. Familiar remnants of his former band Mansun appear, but Spooky Action clearly defines Draper as an effective pop solo artist. Generally the pieces are energetic, strongly rooted in modern rock, with a flair of neo-prog and melodies that follow the common thread of hooks and flairs found in popular music over the past half century.

I heard plenty of similarities to the super group “U2”, and while I don’t feel Draper is introducing anything new, he is offering tunes that certainly are well written and keep the popular rock genre alive. It is great to know that a multi-channel mix is available, but I can’t see the rationale to add it to my own collection due to its higher cost for entry. The album is mixed by Paul Walton who also mixed all of the Bjork surround, and it has been reported to be more wrap around than discrete, mostly front centric. Additionally, several listeners have noted that the overall sound quality is a bit compressed and thin across the mid-range. I welcome any additional comments my readers may want to share here, just send me a message.

I may consider this release if a stand alone 5.1 becomes available, but I can only recommend this for absolute fans of Mansun and of course Paul Draper. For me the more popular the music sounds, the less likely I will want to actually sit down and listen, making the need for a surround mix less desirable.