A Beautiful Curse - A Scar is Born - Blu-ray/DVD 5.1 surround review 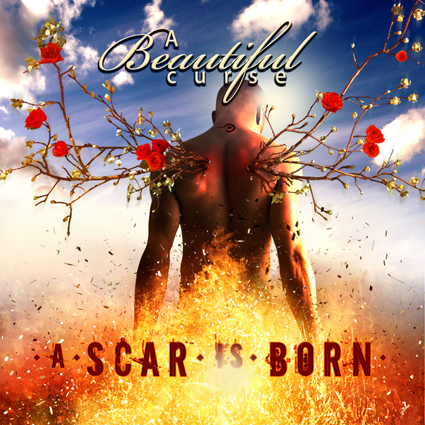 On their second release “A Scar is Born,” the group A Beautiful Curse melds front porch blues with some incredibly challenging electronic and reggae inspired beats. During their fairly large hiatus between their debut release and this latest one, the album was conceived and written over and beyond a year-long habitation in Kandahar, Afghanistan. Written like a diary, from the departure from home, to the mental breakdowns and ultimate soul re-birth that led to the travel back home. Place yourself in the shoes of a person being sent far from home for a long period of time and "A Scar Is Born" just might be your appropriate soundtrack.

The physical media edition contains 4 discs, including a stereo CD, a binaural (stereo “headphone surround sound”) CD, a DVD, and Blu-Ray. The DVD and Blu-Ray features the entire album in stereo and 5.1 surround sound, plus includes "The Story So Far" documentary, "the making of" documentary, music videos, and other visual goodies. But, other than a higher video quality, the content on the DVD and Blu-ray discs appear to be identical, and I do not see the benefit of supplying both formats in this package. Furthermore, to my surprise, the audio for both the stereo and surround sound versions is only available in Dolby Digital AC3 48k / 24-bit, really leaving me to wonder why a Blu-ray was added into this 4 disc set.

Moving into the mix, I found that the 5.1 surround version made very good use of the back channels, which becomes even more apparent on the second track “It's Come to This”, wherein percussive elements emanate from the back right channel with slide guitars also falling in the back. Bass, drums, and vocals among other instruments spread across the front three channels, filling out the soundscape. Overall, I felt that the mix was nicely balanced, with each song carrying its unique placement of parts that fit the aural texture enhancing each musical style.

A Beautiful Curse is the brainchild of drummer and vocalist Kenny James who composed all of the songs except one while bringing in additional musicians to complement the makeup of the band. Crossing between hip-hop, reggae and even progressive elements he tells a story in diary form across the 10 tracks.

Much of the tracks contain a grumbly and full bass sound with distinctly direct vocals that often detailing only the depth of the room where they were recorded. I found many instruments a bit brittle, harsh, and compressed, which in my view is clearly attributed to the Dolby Digital AC3 codec used across all of the high resolution physical media. I also feel this also leaves a little bit of a sheen over the entire mix, leading me to further question why in this modern day of hi-res technology that a higher quality codec was not used for this release.

I continue to enjoy the immersive aspect of the surround mix which really pushes the listener toward the back as the rear channels dominate the section between the third and fourth track during the chants and crowd noise that have been placed into a deep large space. The album contains one cover, the Police classic song “Shadows in the Rain” with its ghostly and mysterious aspects that lead into extremely high energy guitar solos which create an incredibly unique version of this Sting penned piece. Listeners should easily notice keyboards popping out from the back channels and delayed guitars roaring across the soundstage, making for more great use of the entire surround scape.

For those seeking more than just an engaging listen, there is plenty of video to feast your eyes on, since full motion music videos accompany every song on the album. Overall, it is a really excellent production with a great story that draws you in. The music constantly evolves from song to song, lending to the attitude and style that aids in defining each piece on the album.

An important note regarding the surround version, there are segments when the mix is very front centric. This accentuates the use of the back channels which have been used somewhat sparingly in an excellent way. In other words, I really feel that when the back channels are actually active, their pronouncement is very tastefully used, reminding me a lot of how movie production integrates surround sound. In fact, James has written music for both commercials and films over the years, and I wager that he has translated the video treatment of 5.1 audio onto A Scar is Born.

Obviously, the stereo mix completely flattens the surround aspect and there are some subtle changes of instrument placement across the stereo field. On the physical media the compressed Dolby Digital codec is still used, however, when you purchase this album through band camp one will receive a 96kHz / 24-bit lossless download that in my opinion improves upon those 48K AC3 version found on the DVD and Blu-ray discs. I certainly heard increased dynamics and felt that the download version offered greater transparency when compared to the physical media. It is a disappointment for me knowing that technically the ability to include higher quality codecs on the physical media have been passed by.

It is rare that I listen via headphones, but I had to check out the binaural CD to experience the depth of a surround mix on a stereo format. Comparing it to the standard stereo CD, one likely will notice greater depth with elements seemingly pushing behind my head and some even falling in front of me. However, this is subtle at best to my ears, and pails in comparison to listening to a surround mix in an actual room. Simply put, the true depth is noticeably short, and that lack of space does not cut it for my immersive listening desires.

Have a gander at the bonus material, including the documentary which tells Kenny James story from his perspective in a fun and inviting way. It is clear that a ton of work went into this package, and excepting the selection of audio codec, it is hugely impressive. I absolutely recommend A Scar is Born to surround collectors and fans who enjoy a story containing a variety of well written, recorded and performed songs.