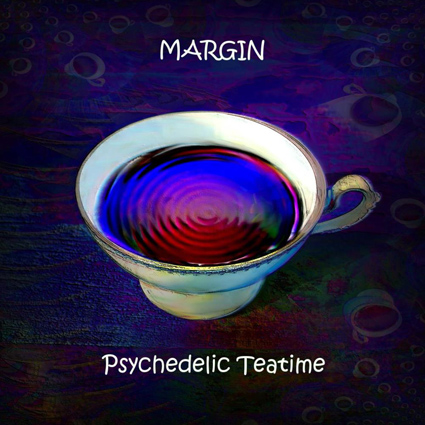 The debut release from Berlin based psychedelic prog project Margin titled "Psychedelic Teatime” covers much ground between old and new progressive and psychedelic rock.  Flowing together, developing melodies with sounds and noises that are wonderfully fuse together, the spirit of 70’s prog shines through with a unique modern flare.

I first heard this release on progstreaming.com, a site dedicated to featuring full length progressive rock albums.  While I primarily focus on high-resolution releases, I was intrigued by the quality of their recording, even when listening at the low 128 bit-rate, and got a copy for review.  Naturally the compact disc version offers a drastic improvement, but still comes along with the constraints of the format.   As is common with compact discs, the top end is edgy, but less so than many other releases I have heard.

The overall mix is very clear, each instrument stands out very well within the mix.  The bass guitar is compressed and punchy while complementing the remaining instruments very well.  Drums are very tight with close mic placement producing little room ambience allowing for studio effects to add mass and depth to their tone.  Keyboards and guitars draw from both the 60’s and Neo-prog textures, each laying their energetic trip throughout the album.  Much has certainly been learned since the days of psychedelia, especially when it comes to limiting the abuse of plate and spring reverbs that drowned some releases in that era.  With radical improvements in technology, artists like Margin have been able to express themselves much better with an arsenal of tools that don’t detract from the music.

Missing however is some of the bizarreness of the writing loved by fans of psychedelic rock.  Instead, Margin has taken a more direct and accessible path that surely has found a larger fan base.  The album gently brings the listener in with the opening track “A Mysterious Cup of Tea,” which is the first section of a five part piece with epic prog written all over it.  Soaring and occasional searing guitars are played a top a steady rhythm that peaks and twains with thunderous tom tom hits.  An acoustic guitar follows as the second part begins, evoking the classical and folk sides to progressive rock.  The keyboard sounds hark back to the 70’s, and the vocals crisply fall over the music.  Clearly the members of Margin are fans of prog rock legends Pink Floyd, which becomes very evident as the third part continues.  The classic heartbeat bass and kick drum are overlaid with synths and scorching guitars which extend into a jazzy segment before settling back to the pieces melody and vocals in part four.  Closing out the five part piece in good form, dynamics are kicked up a few levels nearly leading to head banger volumes, only to slowly fall off quietly ending with slowing drums and synth pads.

The remaining four songs take a more direct path that leans heavily towards rock, sing the words “Psychedlic Underground” several times on “Psychedlic Underground; The Short Trip.”  The tempo has picked up hastening the listener through the song, followed by a more complentiative piece.  Neo-Prog fans will find delight on the eighth track “Last Exit to Pluto.”  With its modern rhythms and choice of synth patches, along with good dynamics and excellent use of digital reverb, this is the exit you’ll want to take.  “Psychedelic Teatime” closes with a reprise of “Psychedelic Underground; The Long Trip,” which justly wraps up a fantastic debut release from Margin.

I really would love hearing a high-resolution version of this release, since the recording quality is very good.  I found no distortion, other than what was purposely added, plus this is a very well balanced disc.  The compact disc is housed in a tri-fold gatefold cardboard sleeve with notes and great cover art.  Sure you can get an MP3 version, but believe me, the CD is worth it!  Strongly recommended for progressive rock fans and lovers of psychedelic music.