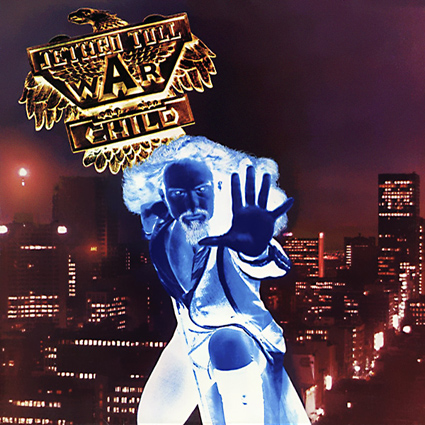 War Child by Jethro Tull was originally released in 1974, featuring one of the group's most prolific lineups that included front man Ian Anderson, along with Martin Barre, Jeffrey Hammond-Hammond John Evans, and Barrie Barlow. Unlike the previous two releases which contained over 40 minutes of continuous music broken into two parts, the songs on War Child were radio ready, with such hits as “Bungle In The Jungle.”

Although his plan for the project was a multi-faceted release that was to encompass a feature-length film, a soundtrack album, as well as a new album from the band. the film and accompanying soundtrack were shelved. This new deluxe version contains 10 orchestral pieces (nine previously unreleased) written for the film's soundtrack, 4 of which are remixed in 5.1 surround and stereo by Steven Wilson

Also unearths are a trio of unreleased recordings: "Tomorrow Was Today," "Good Godmother," and a different arrangement of "War Child" recorded after the version on the final album. These compliment the original album and the bonus tracks, and have been remixed in 5.1 surround and stereo by Steven Wilson

For the purists, there is a flat transfer of the original stereo mix at 24 bit / 96 kHz along with the quadrophonic version that includes two bonus tracks. The 80-page booklet features an in depth article about the preparation and recording of the album, a film script synopsis, along with track-by-track annotations by Ian Anderson, plus numerous rare and unseen photographs.

Surround Sound fans have come to expect nothing short of excellence from remixes by Steven Wilson, and War Child doesn’t disappoint. From the intro segment on the opening title track sirens fade in from the rear with voices and clanging utensils up front with missiles and gunfire moving across the sound stage, it is evident that a wonderful 5.1 experience has just started.

As is all too common, the bass and drums are seated up front with primary parts spread left and right and secondary parts placed in the back channels. However, while this generality make for a nice listen with an emphasis on a stage performance, the real art of mixing shines through during moments when engineers like Wilson step out of this box. These pop up throughout War Child during the voice and effects segments, but also can be found on tracks like “Ladies” where the acoustic guitar gently spreads across the front channels with reflections from the rears and Andersons flute placed directly behind the listener. As the song builds the orchestra parts fill out the back left and right channels making for a great surround experience.

While I have never been happy with the sound of the boxy drums on many of the early Jethro Tull releases, it is the voices, guitars and flutes that shine through on War Child. There is an engaging sizzle to the guitars and an airy whistle to Anderson’s flute, and an ever apparent richness to his voice so easily heard at the end of “Back Door Angels.”

A nice bonus is the inclusion of both DTS 24/96 and Dolby AC3 versions of the 1974 Quad mix. This version makes it apparent that Quad is the root of surround sound and literally can provide an equal immersion. While several pages have been brought forward to the new 5.1 mix, they are truly unique and both very worthy in their own ways. A distinct difference and a valid complaint from stereo purists is the adjustments to the spatial characteristics found in the new mixes, which introduces room ambience and reflections, which as an example are not present on the original quad mix. Ironically the drums have more kick and the bass isn’t as muffy on the Quad mix, just some of the subtle, yet important differences I noticed.

Like the Passion Play deluxe re-issue, it is the additional material that makes this release super compelling. Fans will find an additional eleven tracks from the War Child sessions mixed in 5.1 and stereo by Steven Wilson. Several of these are previously unreleased orchestral pieces clearly with an Ian Anderson progressive twist, yet a true classical feel from which much of early prog-rock was strongly rooted. Listeners will find themselves in the center of the orchestra with strings and winds swelling up from all channels. However, these recordings lack richness in the lows and brilliance in the highs, with heavy weighting toward the midrange. Dynamically the orchestral pieces lack snap, which isn’t to say the recording is weak dynamically, as the pieces move from quiet to loud with regularity, I sense it simply doesn’t replicate the original intensity of the performance. Regardless it is still fantastic to have these mixes at the best quality available.

For those seeking eye candy, there is plenty to be had with hundreds of photos of Jethro Tull changing in a slow moving slideshow as the disc plays. The packaging is bulky but works very well for housing the four discs and booklet and fits perfectly with previous Jethro Tull deluxe reissues.

Recommended for fans of Jethro Tull and Ian Anderson. The double CD, double DVD edition is reasonably priced and offers an indepth listening experience, and is a must have for surround sound music enthusiasts. A vinyl edition is available with the new Steven Wilson mix of the album only, but why bother when you can have it all in this deluxe package!