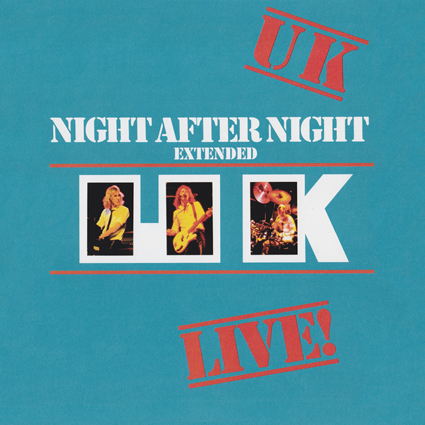 Generally considered the last great British Progressive Rock pioneers of the 1970s, UK had a short run with a couple of studio records and their one official live release titled “Night After Night,” which became the band’s swan song release.

Taken from recordings midway through UK’s 1979 worldwide tour where Eddie Jobson, John Wetton and Terry Bozzio’s concerts in Osaka, Nagoya and Tokyo cemented the band’s incredible success. This in turn spawned this classic live album which recently was digitized from the original Japanese master tapes and remixed by legendary engineer Bob Clearmountain in 5.1 surround sound . What is even more brilliants is this extended edition finally offers a full concert length documenting these energized performances. Even better yet is for high resolution audiophiles the Bluray contains DTS Master Audio 96kHz / 24-bit stereo and 5.1 surround sound mixes.

The multi-channel mix offers a generous feel of being at the live show with reflections hitting off the back channels, along with the audience ambience. Up front the band is spread across the three channels, with much of the energy, including bass, keyboards, and vocals emanating from the center channel. Bozzio’s drums spread widely across the three channels, with cymbals and tom-tom hits falling to the left and right, while kick and snare have also been added into the center channel. I found this to be a very center speaker focused mix, in a sense somewhat mono, yet with distinct stereo and of course the back channel depth, allowing for a very clear separation of keyboards and drums from the bass and vocals.

The quality of the sound is pretty rich, with a boxy feel that I primarily attribute to the centralized mix. Tom-toms are especially snappy, but the cymbals are somewhat lost with kick and snare filling in nicely. Wetton’s bass is somewhat compressed, likely due to the original recording on analog tape, and it translates somewhat thinly through my center channel, extending a bit into the subs.

Wetton’s Vocals are especially clear for a live show, with Jobson adding in harmonies from the left channel. However it is both Jobson’s keyboard parts and electric violin that really are the masters of this album as they stretch across the center, front left and back right channels. Dynamics are good, offering a really good audio document of this show.

Without an earlier copy on hand, I researched and learned that for purists, there is a noticeable difference between the original and new mix which would discount making a simple apples to apples comparison. Thus, what we have here is effectively a new release that has dramatically extended the original album and shed light on parts that were previously buried in the mix.

The high-resolution stereo version may actually become the go to version for listeners, as it doesn’t feel as congested in the center, although it is effectively mixed in the same pattern, obviously with the rear channels folded up front, and the center channel placed between the stereo field. Sure, there is the openness to the 5.1 mix that aids in placing the listener into the performance space, however there is a unifying sense to the stereoscape that makes for a very musical mix. The album is chalk full of incredible musicianship, making Night After Night a very worthy release for your collection.

It is important to note that this is a limited double CD and Blu-ray edition in digipak, which clearly means for surround enthusiasts and UK fans getting your copy sooner than later is strongly recommended. On the other hand, many dire fans will have already had this in their collection as part of the UK Ultimate Collectors Edition, although the resolution is oddly 48k in the Ultimate box versus the 96k in the stand alone 2019 version.   Thus, this would be a slight double dip, and possibly not a compelling enought reason to pick this version up, as it merely duplicates the high-resolution content.