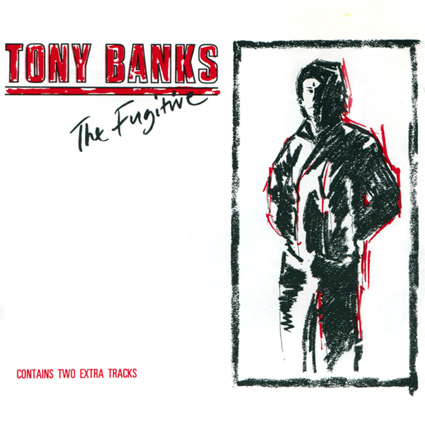 As part of the long awaited reissue of the formerly out of print multi-channel version of Tony Bank’s debut album, “A Curious Feeling,” fans also now can revel in the deluxe two disc edition of his second album “The Fugitive.” First released in June 1983 by the keyboardist and founder member of Genesis on the Charisma Records, The Fugitive began life as a series of home demos. Featuring contributions from guitarist Daryl Stuermer, Mo Foster on bass and a few different drummers including Steve Gadd, Tony Beard and Andy Duncan, this new edition has been remixed from the original master tapes by Nick Davis and Tony Banks.

Available only as a Deluxe edition, the release includes a DVD with a DTS 24-bit / 88.2kHz 5.1 surround sound mix and a 24-bit / 88.2 kHz stereo Mix of the full album, along with the rare promotional video of "This is Love.” It all comes packaged in a hard-back book style with illustrated booklet and notes from Tony Banks.

Ready to flashback to the 80’s with a bit of a prog twist? You’ll get it here with the big drum sound, some cheesy synth patches, and a peppy feel. This keyboard centric album finds little immersion for the surround sound listener, primarily with synth pad and swells emanating from the back channels, while the remainder of the parts are spread across the front. I felt exhausted after taking a listen, as the sharpness of the high end far outweighed the mids and lows. Dynamics are somewhat muted, mostly by the song writing which is relatively flat providing a steady beat throughout most pieces.

It seems that the instrumental track “Thirty Three's” is actually the most encompassing 5.1 mix, as it is layered with several parts which are well balanced around the room. “Charm” also is pretty cool, but we could only wish for more material like these pieces on Fugitive, as Tony Banks vocals are pretty darn weak, taking another notch off the listening experience.

The high resolution stereo layer is fairly wide, but rolls off the deep bottom heard on the 5.1 mix. It is also bright and lacks mid range warmth, but most likely this reflects the original recording and how Banks intended the actual mix to be heard. The bonus video is worthy of a viewing, especially for early M-TV fans.

While I am a sucker for surround sound releases, unless you are like me, or actually love this release, then skip it. I rarely pan a release, but there is nothing amazing about The Fugitive. Of course, collectors will want to get a copy, cause you know that a collection is incomplete when you don’t have it all!