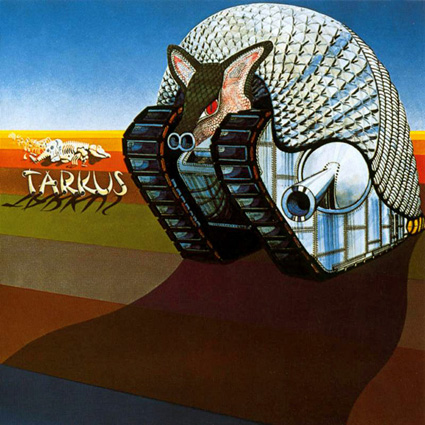 No question you'll want to get the Emerson, Lake & Palmer's second release Tarkus, which is presented as a deluxe 2 CD & 1 DVD-Audio version featuring stereo and 5.1 mixes engineered by the King of surround sound, Steven Wilson. The original album is augmented by several previously unreleased songs and alternate versions. There is also a comprehensive booklet containing sleeve notes by Chris Welch.

The title track, "Tarkus," filled the entire first side of the original LP, sprawling over seven-parts, an opus approaching 21-minutes containing compositions by Lake, Emerson and the two masters in tandem.  Regardless of the version the listener plays, it remains the centerpiece of this reissue. The opening track provides showcases to all three members of the group, from the roiling opening through alternating moments of ferocity and calm, anger and regret.  Some have suggested that the album and song name was derived from both "Tartarus" from Greek mythology, which is a prison under Hades, and combined with "carcass," leading us to assume why the name was written in bones on the album cover.

Fans will rejoice over the sound quality, which is top notch, especially Wilson's truly stunning 5.1 mix.  Palmer's drums will encompass you one minute from side to side, then be directly in front of you as Emerson's organ strikes you from a rear channel, such as the "Mass" section which is definitely  astounding.

The remaining tracks don't attempt to compete with the first, yet they are still very worthy ambitious efforts. Even in shorter pieces, numerous sides of the band shine.  Emerson and Lake's "Bitches Crystal" features a throaty vocal from Lake, with Emerson's piano shifting between lyrical and tense.

Wilson's stereo remix of Tarkus has been expertly crafted with new subtleties that those most familiar with the album will immediately hear.  Palmer's drums are vibrant and exhibit a deeper kick.  Keyboards and guitars are dynamic and rich filling the sound field with the trios power.  The remix also adds three tracks, Lake's "Oh, My Father," which is also available in 5.1; an alternate take of the "Mass" section of "Tarkus;" and a piece entitled "Unknown Ballad."  The ballad despite being included here, has some controversy claiming some doubt that the song is actually an Emerson, Lake and Palmer recording.  Regardless of whose work the song actually is, it's an gentle piano-based ballad with a lovely melody and dreamy lyrics.

Surround sound enthusiasts will find the 5.1 mix of Tarkus filling their room starting with Emerson's synths in the rear channels and enveloping the listener with Palmer's drums and Lake's bass and vocals.  Cymbals are crystal clear and keyboard sounds are full and deep.  Vocals are distinct and ambience is literally three dimensional.  While there is little movement in instrumentation, synths swirl toward the front and roto-toms spread to the sides.  I especially love how "The Only Way (Hymn)" starts with the organ spread around the four channels giving way to bass notes up front toward the left, with the melody in the back left, while the chords are on the right front and rear channels.  I really felt like I was sitting in a church hall with a massive organ surrounding me.  However, purists will be less impressed with the modernized digital reverb that throws Lake's voice to all corners of the hall.

This is a fantastic second addition to this reissue campaign that will continue with expanded versions of Pictures at an Exhibition (1971), Trilogy (1972), Brain Salad Surgery (1973) and Welcome Back My Friends to the Show That Never Ends – Ladies and Gentlemen (1974).  Until those sets are completed, fans are sure to love "Tarkus" and the bands debut release "Emerson, Lake, and Palmer," also reviewed here.  An absolute must have surround sound release.