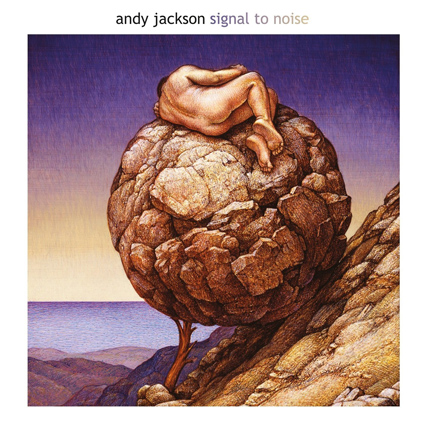 Step into the world of twice Grammy nominated Pink Floyd engineer Andy Jackson on his solo release "Signal to Noise."

Proclaimed as a fine, modern, progressive work, and drawing on Andy Jackson's exemplary work as an engineer and producer, "Signal to Noise" reflects on what is important in life from the humdrum of everyday existence. Cherry Red Records has released a limited two-disc edition of the album which includes a region free DVD featuring a Quadrophonic mix of the entire seven track album.

Of course it would be easy to make comparisons to Floyd, given Andy's work with them, however, this album is a little gem in it's own right, with some lovely poignant and emotional moments. The arrangements are crafty and flow perfectly, with some magic that makes the aural experience totally worth it. In fact, Signal to Noise is at the level of complexity I would have expected from veteran prog band Pink Floyd on their latest release, the Endless River, but sadly didn't receive. Instead Floyd fans should turn to Jackson to embrace the next generation of prog music.

For surround sound fans, the DV/D contains both MLP 96kHz / 24 bit 4.0 and DTS 96kHz / 24 bit 4.0 audio. The surround mix is full and extensively uses all four channels in a multitude of ways, including delays, echoes, and instrumentation panned to the various corners of the sound stage. I specifically like the delayed synth parts that cross between the left and right back channels on the opening track "The Boy in the Forest." The acoustic guitars meter out the 3/4 rhythm widely in the center of the front channels with ethereal synth pads swelling from the rears. The calm vocals are complimented by the bass and gentle drums up front, with extreme care to the overall balance of the mix. A call and answer guitar solo takes the left channel and answers in the right channel, with an echo that falls toward the back channels.

I admit I have become accustomed to deep lows emitted through the sub-woofer speakers, along with the vibration that accompany these resonant sounds. Yet, the quad 4.0 mix reminds me more of a vinyl master, where the bottom and top is not accentuated. Likewise, when it comes to music mixes, I have been on the fence about the utilization of the fifth (front-center) channel. While more direct from speaker to ear, there is a melding effect when vocals and other instruments are placed between two channels, such as the front or rears, or even between the front and backs. Certainly not pure, yet somehow very alive, a quad mix speaks well to the minimum requirements for a surround mix.

The third track, "Invisible Colours" makes no bones about using the quad setup, with parts moving and echoing across the sound stage. This aural candy lends very well to the dynamics of the surround mix, creating an exciting listening experience. Jackson does not overuse any studio gimmickry, allowing synths and guitar solos to swell and decay around the listener. While this is not meditation music, it is certainly meditative, or better put, contemplative.

It is not until the closing track, "Brownian Motion," where it becomes so apparent the extent of Jackson's years of experience and love for progressive and psychedelia absolutely shine through. Melding modern with the classic sound, phased vocals subtly echo in the front channels, then fall to the back, while guitars are dreamily delayed in the rears. Cymbals continuously count out the rhythm, falling deeply into the front channels, releasing high energy bursts from time to time, with occasional tweaks zipping around the sound stage. All ending suddenly, and this great release comes to an end.

Along with the standard CD, a LPCM Stereo mix is available on the DVD for hi-res fans. Surely progressive rock fans should add this to their collection, and certainly any surround sound fan must get the limited edition. From my perspective, Signal to Noise surpasses the Endless River when it comes to material, and has a more interesting surround mix. However, the overall quality of the audio tracks are clearly in favor of the Pink Floyd release, which includes the sub-woofer channel and likely many more hours of production time that I wager aided in refining the source audio. But, not to confuse my readers, get this release!

CD and DVD with Quad mix..