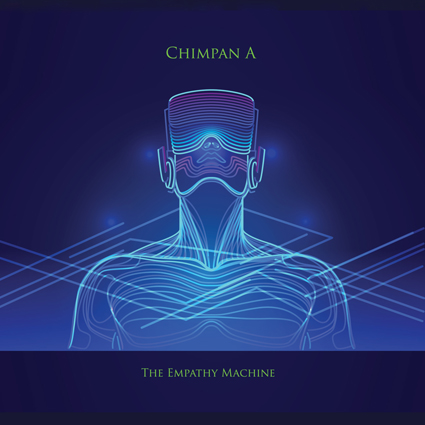 Back In 2006 Magenta's keyboardist, Robert Reed, created a side project under the name Chimpan A, a trio he formed with singer Steve Balsamo and guitarist Rob Thompson. The group ventured to mix trip hop, techno and lounge music. Now 14 years later Reed and Balsamo has teamed up again as a duo under the same project name on the groups new album “The Empathy Machine.” Similar to Reed’s Sanctuary series he has overdubbed multiple parts using a variety of instruments, including keyboards, programmable drums, guitars, and bass. Like the project’s debut release several different guest appear on the album featuring, Tony Dallas on spoken word; vocalists Christina Booth of Magenta, Rosalie Deighton, and Kirstie Roberts; plus Shan Cothi on soprano voice; Rachel Mari Kimba on cello; and Steve Roberts on live drums.

Fans of Pink Floyd, Peter Gabriel, and Bjork will find the project comfortably blending those artists recognizable musical traits within Chimpan A’s own style. Sitting between progressive rock and artistic pop, the project leans closer to pop with their modern rhythmic beats and feel good melodies. Mixed within the tracks are soulful guitars that seemingly pay homage to a melding of David Gilmour and Mike Oldfield. Speaking of Oldfield, characteristics of his later records are easily identifiable here, as Reed has combined many similar musical elements.

The Empathy Machine is a gem worthy of picking up and for high resolution enthusiasts Reed has once again made it available in both hi-res surround and stereo on the DVD that is included with the cardboard gatefold CD edition. Both stereo and surround mixes are available as AC3 48kHz / 24-bit, and a DTS codec at 48kHz / 24-bit is also available on the DVD too. A friendly note to prog rock aficionados the album is cut from a different cloth and is simply good music defying any specific label. There is a classiness , flow, and ease of engagement that draws one in for repeated listens.