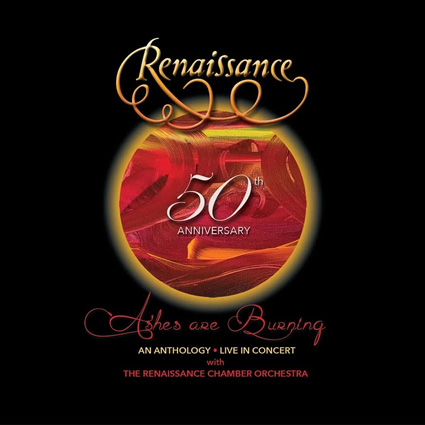 Renaissance has released a Blu-ray/DVD/2CD set featuring their 50th Anniversary Concert at The Keswick Theatre in Glenside PA filmed on October 12th, 2019. Celebrating the bands widespread touring and recording during the past half century, this 11-song set debuts their first ever high-definition concert film and Blu-ray release and features their own 10-piece Renaissance Chamber Orchestra with special guest Renaissance co-founder Jim McCarty.

The set includes a retrospective of their classic songs, a few which have never been orchestrated before, including the most notable “Ashes are Burning.” Featuring lead singer Annie Haslam, the group performed an impressive concert alongside a magical backdrop of paintings for each song, created by Haslam. The band has a rich history as progressive rock pioneers who rose from the ashes of the seminal UK rock band, The Yardbirds. Renaissance is acclaimed for their unique blending of progressive rock with classical and symphonic influences, now spanning fifty years spearheaded by the 5 octave voice of Annie Haslam and the incredible songwriting skills of Michael Dunford.

The Blu-ray offers both 48kHz / 24-bit 5.1 DTS HD Master Audio surround and 48kHz / 24-bit 2.0 stereo LPCM audio track that play alongside the concert video. Audio quality is top notch allowing fans to have the feeling of actually being at the show with the extra benefit of the orchestra parts discretely placed in the back channels. Room ambience is excellent along with audience interaction between songs. The center channel has been used for the various introductions throughout the program, while actual vocals are centered between the front left and right channels. There is light use of the sub-woofers, yet the bass is warm and solidly holds down the bottom. I found the overall sound quality to be very smooth with outstanding clarity of Haslam’s lead vocals. Both the surround and stereo mixes are spot on making this another favorite in my concert video collection. In fact, the hi-def video is extremely good, as expected for a modern day release. Overall, this is an enjoyable watch from beginning to end, even though I wish there were more than the 11 songs that nearly span two hours!

Recommended for fans of Renaissance, collectors of progressive rock and concert films, plus immersionists who seek high quality surround mixes.