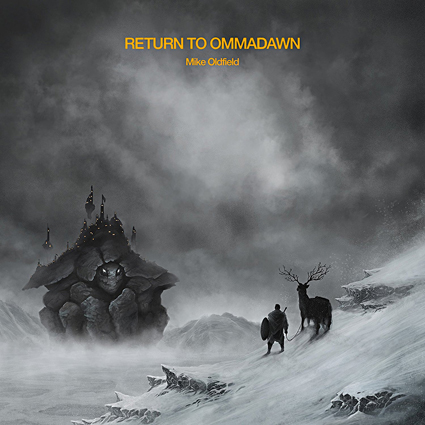 After asking fans for their opinion on what direction to take for his next album, Mike Oldfield discovered that many of them wanted him to go back to the acoustic style of his earliest works, specifically citing Ommadawn to be a favorite among fans. Thus work on a new album began in December 2015, taking nearly a year to complete. Following his roots, this is a pure solo work, he says “I’m the only musician who is involved. I play everything. There are no guest appearances whatsoever on Return to Ommadawn.”

OK, that’s not exactly true, as those with keen ears will notice a very brief choral burst from the Penrhos Kids at the end of the second track, titled “Part II”. As a way of linking these two albums across more than 40 years Oldfield felt it was critical to contain a follow-up to the original “On Horseback,” the final song on “Ommadawn”. So, he excerpted one line from the children’s choir who sang on that track and inserted it on the new release.

Although the album has been specifically designed for vinyl, containing two tracks, each one about 20 minutes long, they simply become parts one and two on the shiny disc versions. Of course you know since we are reviewing it here on Mediaversal, we are checking out the high resolution format available as part of the CD / DVD deluxe edition that contains a 5.1 surround mix of the entire album, although it may be the vinyl one that matters the most to you.

This is such an easy album to really sit down and listen to, with so many parts and numerous movements that keep the music alive. Listeners can play either the DTS 24bit/48kHz 5.1 surround, or the Dolby Digital AC3 5.1 surround codec. Certainly, the DTS far surpasses the AC3 codec in many ways, most obviously the squashed sound of the AC3 version loses the impact that Oldfield worked so hard to create. Thus, my following comments are all based on the DTS 5.1 version.

Once you hit play, you will be immediately immersed from the first to the last note, and while I may not agree with some of the tonal qualities of every instrument, the recording quality and mix is stellar. There is plenty of separation making for a fantastic discreet mix that is extremely transparent. I sensed most instruments were recorded closely, creating a very direct in the ear experience that has been placed into a very pleasurable ambient space lending depth and distance across the soundstage.

I especially appreciate the introductory melody which shortly leads into the call and response among the three guitars, first taking the center channel, then the left and onto the right. Expanding to keyboards, penny whistles, and so on, Oldfield finds a home for each instrument around the five channels, creating a very well balanced listening experience. Although the dynamics are somewhat subdued, attacks are immediate elevating the peaks to new heights along the way. The back channels are used sparingly, with the predominate parts spread across the front three channels, making extensive use of the center speaker.

There are moments of shear rumbling bass lows that emanate from the sub woofers, and pounding African table drums that feel much like a tribal march has arrived in the listening room. Fans of Oldfield’s early works should be pleased to know that the two long form tracks absolutely hark back to his roots, and much like Tubular Bells segments flow seamlessly into one another. Personally, I believe his musicianship has matured and Oldfield has become even more meticulous about presenting an amazing recording for followers to enjoy.

The LPCM 24bit/48kHz stereo version frankly is wonderful, and other than the depth of the multi-channel mix, really doesn’t lose anything. For my hi-res stereo readers, the sonic clarity on the DVD makes this a very worthy addition to your collection. Of course, the half-speed mastered vinyl could be just as good, alas I don’t have a copy of that on hand to make a comparison.

Overall “Return to Ommadawn” is a must have for fans of Mike Oldfield. Regardless of whether you prefer the surround sound mix or the stereo layer, this album shouldn’t disappoint. Multi-channel enthusiasts will likely want to include this in their collection given the high quality sound and wonderful use of all five fschannels. It is a perfect piece for so many listening moods, get your copy before this limited edition is no longer available at reasonable prices.