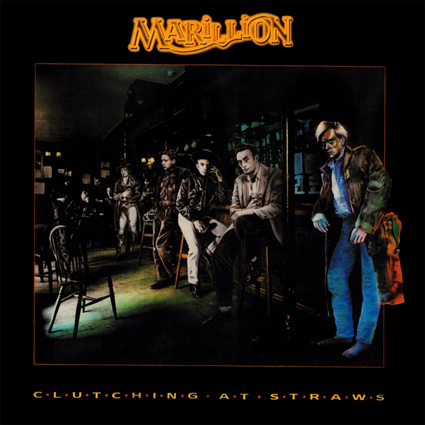 Parlophone has reissued a limited edition of “Clutching at Straws,” the fourth studio album from the British progressive rock quintet’s Marillion. The 4 CD + 1 Blu-ray deluxe box set contains a truly wonderful 5-1 mix created by Andy Bradfield and Avril Mackintosh who was the original mixing engineer for producer Chris Kimsey in Advision studios back in 1987. With her intimate knowledge of the album, Mackintosh has joined together with Bradfield providing a new take on the songs, bringing new energy and life into both the 5-1 and new stereo mixes.

Clutching At Straws turned out to be Marillion’s final studio release with original singer Fish, delivering three top forty hits, “Incommunicado,” “Sugar Mice” and “Warm Wet Circles.” The deluxe edition also includes a concert recording of the band performing at the Edinburgh Playhouse in December 1987. Note that some of the live performances have appeared on The Thieving Magpie live album, but for the first time the concert has been featured in its entirety and all of the tracks are new mixes for this 2018 deluxe edition by audio engineer Michael Hunter.

There is also a disc of demos, many of which have been previously issued on the 1999 2-CD version. This 2018 edition adds four new ones which are “Hotel Hobbies/Warm Wet Circles,” “Just For The Record,” “Torch Song” and “Slàinte Mhath.” Also on the Blu-ray fans will find footage that is part of a great collection of material from 1986 and from the follow up album that never happened in 1988.

A nice plus is the inclusion of the original stereo mix on the Blu-ray along with an interesting new 60-minute documentary featuring Mick Wall interviewing the band where old friendships prevailed and the existing camaraderie is obvious, plus viewers can find promo videos for three singles.

Now, let’s dig into the high-resolution surround mix. Please know that at the dismay of some multi-channel enthusiasts Steven Wilson has no part in the remixing process. However, this mix is equally as compelling as the previous surround mixes that Wilson created for the Marillion albums “Misplaced Childhood” and “Brave.” As much as I enjoy the Wilson remixes, one must recognize that there are other amazing audio engineers who are at his level of talent, and may even surpass his efforts. I believe this to be the case with Clutching at Straws, the remix team has done an excellent job with the new mix.

I first sat down with the two earlier surround releases to tune my ears to the Wilson remixes, which continue to be a revelation in audio quality and use of the surround stage. Then, with great anticipation I placed Clutching at Straws into the Blu-ray player and selected the LPCM 96k / 24-bit 5.1 mix. While I had sat and listened to this in the past, there was a new sense of awareness about the high level of quality of the multi-channel version. The clarity and use of the surround scape is on par with Wilson’s mixes for the band, and one aspect that really jumped out at me was the improved dynamics of the bass guitar.

The album opens with the melodic “Hotel Hobbies” with Rothrey’s guitars soaring from the front left channel into the rears. Keyboards take the opposite site freely floating between the front and back speakers, with the vocal work of Fish penetrating from the front center channel. Bass and drums naturally are up front, creating a pleasantly immersive listening experience.

A real sense of space is developed on “Warm Wet Circles” whith vocals distinctly reberberating off the back channels, and the roundness of the bass absolutely fills out the low end making excellent use of the sub-woofers.

I was wishing the drum fills spread wider around the room, and took a side step to listen to the original mix, only to discover that drums were also pretty centrally focused there too. Thus while I may wish some artistic liberty by the audio engineers, I also appreciate that they remained true to the original mix. Of course, moving into the 5.1 realm is a far stretch from stereo, however maintaining placement between left and right is a sensible way to recreate a new version.

Speaking of the difference between the original mix and new stereo mix, listeners will likely be as pleased as I am with how well it has been cleaned up, removing the muddiness and breathing more life into many of the elements. Guitars shimmer and keyboards feel very open and transparent. Drums have gained some top snap and full thump at the bottom, with the bass really digging in and keeping its powerful sound.

Careful listening may reveal subtle decay differences, which seemed to decrease the clutter I heard on the original mix. Both the stereo and 5.1 absolutely take Clutching at Straws to a new level of audio ecstacy.

I noticed no appreciable difference between the DTS 96k / 24-bit Master Audio and LPCM 5.1 versions, which is exactly the way it should be. Surround enthusiasts will find some nice ear candy with movement of parts in choice places and excellent use of the back channels for synthesizer solos that sweep across the rears, and guitar parts that seemingly surround the sweet spot as they bounce decaying from the front to the back left and onward to the back right channels. 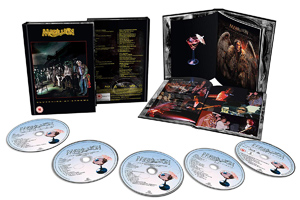 As we reach the final track called “The Last Straw, Happy Ending” a sense of aural satisfaction unfolds. A bit of Floydesqueness embodies this track with repeated echoed vocals from the back channels and smooth downbeat feel. Guitars roar from the front taking on the persona of some of the heaviest rockers, all while maintaining the progressive sound which Marillion has become so well known for.

While I prefer the openness of the surround mix, the new stereo mix is absolutely amazing too, and the bonus material is worth checking out. The addition of the concert on CD’s 2 and 3 absolutely provide a time capsule into the live sound of the band, and the demos speak for themselves.

Strongly recommended for Marillion fans, surround sound enthusiasts, and progressive rock collectors. Remember, this is a limited edition that apparently will only receive a single run, so if you are at all interested, pick it up before it hits the secondary market at ridiculous prices.