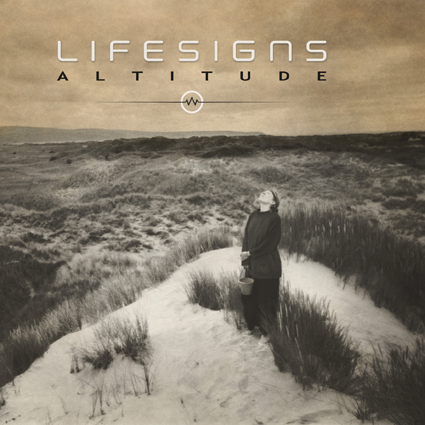 I was first introduced to the UK prog supergroup Lifesigns over eight years ago while operating a streaming review site, and I was immediately hooked. Thanks to an extraordinarily successful crowd-funding campaign from over 40 countries, they have released their third album, “Altitude” which finds them taking the progressive rock genre to new heights with an accessible and energetic twist.

Founding member John Young comments that the group style focuses on a positive and uplifting narrative that certainly is needed after these pandemic times. His writing has been influenced by luminary progressive rockers such as: Yes, Gentle Giant, Genesis, Caravan, Camel, as well as fusion oriented artists including Brand X and drummer Bill Bruford. Fans will likely find the progressive uniqueness of Lifesigns to be refreshing and captivating.

Altitude was recorded remotely without the band having met their new drummer Zoltán Csörsz in person, yet the intricate interplay between him and bassist Jon Poole defies the physical distance between them. John Young was classically trained both in piano and vocals with a cathedral choir, while guitarist Dave Bainbridge brings years of experience to the band from his formidable career.

Of course, from an audio fidelity perspective, the engineering prowess of Steve Rispin is the one to thank for providing an airy and vibrant mix. The album is available on CD, Vinyl, and as a 24-bit FLAC download, which is the version utilized for this review.

The title track opens the album, moving from a soft intro into a vivacious swirling synth and guitar solo that clearly defines the unique progressive sound of the group. The mix has been carefully blended with tingling guitars and spacious keyboards, accented by the strong rhythm section that holds down the bottom. I especially enjoy the classical aspects of the strings and choir elements that shine through in the middle sections of the song.

An older tune that the group felt should see the light of day is “Ivory Tower,” which has become a standout track that starts in ballad form with a gorgeous melody that flows over a plucked acoustic guitar. As the song develops, the band kicks in with a rich kick and full snare moving the rhythm forward, while the smooth and round base fills out the lower regions. It subsequently elevates to extreme heights presenting listeners with a wall of sound that delivers a cranging guitar and soaring keyboard parts, plus one should hear some nice dynamics throughout this particular track too. Young’s vocals are strong and placed closely in the center as if he were standing right there singing in your listening room. Check out the guitar riffs at the end that call and respond between the left and right speakers as the vocals sing out “I fall down.”

Musically I am delighted by how the group blends progressive and fusion as is most evident in the song “Shoreline.” Jazz influences really jam through at the start of the piece, while the progressive elements are pronounced during the vocal passages. Take special note to the vibrant ripping guitar solo at the end of the song that crosses between prog and fusion. The openness of the mix again is wonderfully defined here, and one main note that while on some tracks such as this one, there is a moderate central focus, while there also is a perfect blend between all of the parts.

Melodee absolutely abounds on Altitude, and the tune “Fortitude” wonderfully follows that thread with the bass and keyboards mirroring the vocal lines only to separate into counterpart melodies. Arpeggiated keyboard parts are mesh with synth pads that spread widely across the stereo field, and in the groups unique style the peace rises and falls with soaring crescendos and somber interludes.

As the album closes reprising the title track, a very rhythmic and lively kick drum and percussive part carries the ethereal short piece to the end. It is important to mention that Young write through a process called 'channeling', which is why I sense the album flows so well. Hats off to the entire group for recording, mixing, and producing this collection of songs in their respective bedrooms around the globe, it really turned out exceptionally well.

This third album from the group is absolutely recommended for fans of progressive rock and listeners seeking well-orchestrated keyboard and guitar solos. Altitude is a beautiful, spirited release that is immediately enjoyable on the first listen.