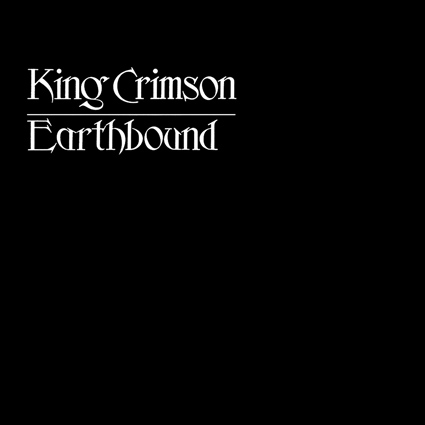 I have never been a fan of bootleg recordings due to their lo-fi audio quality, and even though “Earthbound” was an official bootleg release, it still fell into that realm for me, plus Atlantic here in the USA didn't even bother to release it. However, listening beyond the bootleg quality reveals an incredible time capsule of the Island era King Crimson incarnation containing some of Robert Fripp’s most uniquely unsettling guitar work and incredibly wild solos by Mel Collins. Earthbound first became available in 2002 on CD with a mystique that enhance interest in the album, which is now expanded further to a 12-track version compared to the original 5 track 1972 album. Additionally, this all new anniversary edition includes a DVD featuring Earthbound in 24bit / 48kHz hi-res stereo audio.

As great as the performances are on the bootleg live concert recordings, the sound quality is simply dreadful for an audiophiles ears. Still don’t agree with me? Then listen to the vinyl transfer, ugh. Distortion stretches across every track, with the cymbals the most exemplified, and even the bass sounds like it wants to jump out of the grooves. Yet, I wager even the somewhat cleaned up hi-res version transferred from the stereo masters found on the DVD will be the best you’ll ever hear this treasured album. Sound quality aside, let’s remember it is all about the music, right? There is plenty of ear bending improvisational segments mixed among extended classic versions of their early repertoire on Earthbound. Ian Wallace really kicks it on drums on the extended version of “The Sailor’s Tale.”King Crimson fans who don’t care for jazz infused rock and crushing Avant Garde should probably just skip this album, for everyone else, read on.

For audiophiles, satisfaction is easily found when moving to the next chapter on the DVD where we find a sonic overhaul of the Summit Studios performance which originally aired live on Denver’s KFML on March 12, 1972. These are the only surviving multi-track live recordings from the 1972 tour and are newly mixed in both quadraphonic and stereo. Additionally, this release also features 15 minutes of material not included on the original mail order only CD of Summit Studios issued by DGM in 2000. You’ll also find the album length “Schizoid Men” sequence from the “Ladies of the Road” live album. Likewise, for broadcast collectors, this disc contains music performed after the allotted broadcast window had elapsed, providing new material for you to check out.

Of course, it comes down to immersion, balance and dynamics, some of which can be found on the Summit Studio recordings. This is not an encompassing quad mix, rather the quad version puts the listener into the performance space several rows back from the stage. Reflections eminate from the back channels while the band roars from the front. The four musicians weave jazz riffs over heavy rock rhythms with Boz Burrell vocals and furious bass anchored between the front channels. There is a night and day difference in audio quality compared to the Earthbound recordings, although the Summit Studio recordings still don’t match the other remixes of the early King Crimson catalogue. Dynamics are pretty good, especially for a one off live radio broadcast. It seems that the DTS codec is 24bit / 96kHz, and I say it that way, because the LPCM stereo version is only 24bit / 48kHz. Usually these are reversed, with the lower bit rate given to the surround version. I get the sense that upsampling occurred from the multi-track transfers when creating the quad mix.

Robert Fripp’s guitar dominates the right channel, while flute and saxes played by Mel Collins blow from the left channel. There is a real sense of space that surrounds the musicians, which is extremely noticeable as the sax frenetically flows through its solos. As one would expect audience applause generally falls to the back channels, and overall this recording has extremely low unwanted distortion.

Producer and sound engineer David Singleton has maintained an excellent overall balance when remixing the Summit Studio sessions from the original multi-trakcs, providing a very live quad audio mix. Even the boxy club feel of Ian Wallace’s drums which spread across the front channels while reflecting in the rears add to the appeal of this live performance. Staples include “21st Century Schizoid Man,” “Pictures of a City,” and “Sailor's Tale.” You may find yourself repeatadly spinning “The Creator Has a Master Plan” with its hypnotic jazz groove that spills into a nasty 12-bar blues lick, then returning you back to where you started.
`
The stereo version takes a different approach with a push of the saxes and softening of the drums. The overall mastering is higher in volume compared to the quad version, and Fripp’s guitar slaps off the left channel, giving it a more central focus during sustained notes, rather than its placement in the right channel. I didn’t find much depth to this version, and it lacks some focusing that is more evident on the quad mix, especially related to the drums. This doesn’t make the stereo version a bad mix, just different, and not my personal preference.

For some, the multi-part album length version of “Schizoid Men” found in its own chapter may just make this edition worth the price of admission. While available elsewhere, it is a perfect addition to this set taking the base song of “21st Century Schizoid Man” to an entirely new level that radically does unseat the monkey mind. Once again fidelity is lacking, although available in LPCM 24bit / 48kHz stereo.

All in all, from an audiophile perspective I can’t recommend Earthbound, but from a performance perspective this is music to my ears. Recommended for fans who enjoy improvisational riffing that will take you into the Avant Garde realm, and of course collectors who must have it all. I must note that for those with deep pockets and a desire to check out the balance of live recordings from this era should consider the Sailor’s Tale box set, which includes everything on this Earthbound edition on a Blu-ray, among many other discs in that box.