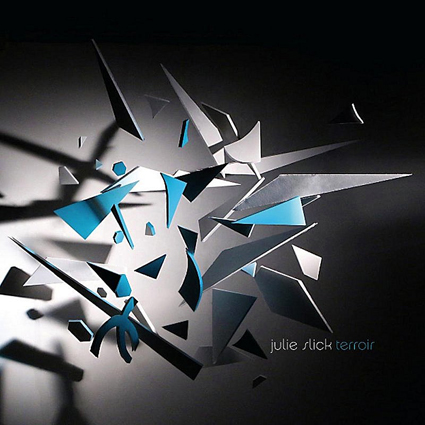 If you don't recognize the name Julie Slick, she is the bassist for the Adrian Belew Power Trio and Crimson ProjeKct bands. Her second release "Terroir", which translates to "from the earth," features luxuriant soundscapes, tangled rythms and an impressive list of guest musicians including sought after drummers Pat Mastelotto and Marco Minnemann along with legendary guitarists Adrian Belew and David Torn.

Guitar Player's Anil Prasad described Slick as being, "One of the best bassists in the world." Using Kick Starter to help fund her second release, funders, like myself, anxiously awaited compact disc copies. Additionally, lossless versions are also available on Band Camp in FLAC or Apple Lossless, or for those who still want to forgo sound quality to save space, MP3's are available there too.

Opening with the evocative darkness of "6," recorded with guitarist David Torn and King Crimson drummer Pat Mastelotto, listeners will immediately feel the thundering bass of Julie Slick.  Simmering down, "Pi" settles in with distant wordless singing layered over kaleidoscopic structures for bass and acoustic guitars..  Slick's brother Eric, who played drums with her in the Belew Power Trio, adds to the nightmarish depth on "Accidental Incident", The title track, Terrior, leads back toward a heavy rock groove followed by "Quintal", "Go!" and "Minminzemmi" which are all pieces of the comparatively conventional fusion influenced prog, but are still detailed and thoughtful arrangements.

Adrian Belew contributes to "Siren" with his genius guitar solos. "Skypark" contains an unusual combination of world music and electronic rhythms. "Even the Tide Recedes" consists of avant-garde soundscapes and relaxing guitar improvisation that vary between repetitive, top-heavy and free. Layed back bass solos convert into bass riffs that form a sort of rhythm in the last third of this fantastic closing piece.

When I first listened to Terroir, I was not too impressed.  There was no depth, and the songs didn't grab hold of me.  However, I had received an MP3 early release version while awaiting my Compact Disc copy.  This is a perfect example why MP3 audio, and the horrid embrace of downgraded versions of music releases neither serves the musicians, producers, and most definitely the listener.  In fact, Terroir became an entirely different album when I received my CD copy.  The guttural rumble, thunderous pounding, and deep grind can only be experienced with a lossless version.  The songs took on an entirely new character, and I truly grasped the depth of this engaging release by the amazing bass playing of Julie Slick.  As a hi-fidelity listener, I can only hope that a high resolution version will someday be released, which I am certain will cause the earth to shake, even more than it already does.