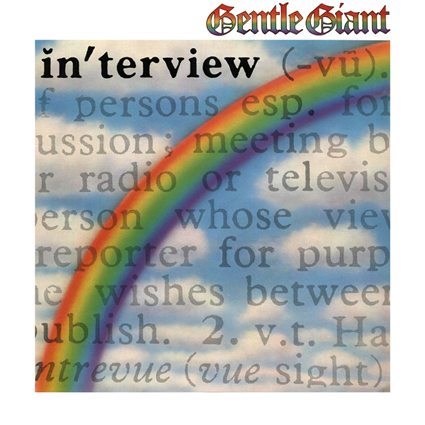 Unfortunately progressive rock was nearing the end of its initial popularity at the time of Gentle Giant's release of Interview.    While they didn't surpass the success of previous efforts, they continued to propel their brand of complex music into surprising new directions.  Centering on a fictitious interview based upon the music business, Interview is actually a concept album. Featuring the typical complex harmonies and intricate musical passages, Interview is generally considered to be the last must-have recording from the band.  However, it is important to note that during the four week period the band wrote, practiced, and recorded Interview, they were still pretty worn down from the success of their previous album and the numerous stadium shows that immediately followed Free Hands release.

Although the band's one time stated aim was to "expand the frontiers of contemporary popular music at the risk of becoming very unpopular," this altered significantly with time, and Interview certainly leans toward mainstream compared to all of their earlier releases.

Regardless of the above, this special edition features a lost quadraphonic 1976 mix on the DVD which surround sound enthusiast will be excited to get their hands on, presented as both a 4.1 DTS 96kHz / 24-bit and Dolby AC3, along with a digital 96/24 flat transfer of the original 1/4 inch master, and a remastered CD and accompanying book with sleeve notes by band members.

The great news is the sound is excellent compared to the older reissues, specifically when you hear the versions which are on the DVD-Audio disc. Listeners will likely hear how clever the music and arrangements truly integrate vocals and instrumentation. Gentle Giant's trademark harmony parts are distinct and vibrant., while the strong instrumental parts played on the many keyboards, guitars, violins, saxophones and percussion instruments are richly alive on the various versions on this release.

Interview can be loosely described as a concept album, although without a common lyrical thread running through the songs, with the title track is a sideswipe at the lack of imagination shown by most journalists interviewing the band.  At several points the album's tracks are linked by brief snatches of conversation between writer Phil Sutcliffe, a long-standing Gentle Giant admirer, and the group. They co-opted Sutcliffe to perform this mock interview, then spliced excerpts between the songs themselves, which stand as the band's responses to his questions. The title song has lyrics derived from the type of question and answer dialogue they had encountered while talking to the music press. This album was less successful with critics and in the charts than their previous albums.

Not recommended except for die hard Gentle Giant and progressive rock fans.