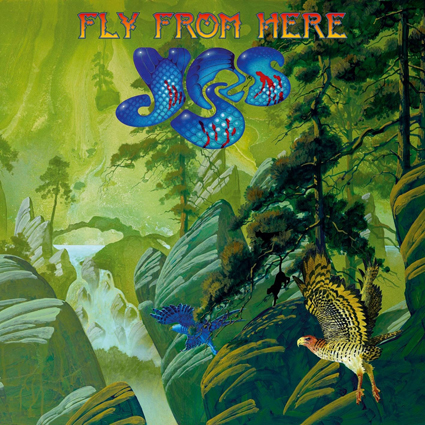 Grammy Award winners YES, one of the most influential and ground-breaking progressive rock bands are back with their first all original new album in 10 years.   "Fly From Here" takes listeners back to an early Yes sound, and is best described as a follow up to their  1980 release "Drama".  The production is slick and the sound quality crystal clear with a strong resonate bass, sizzling guitars, vibrant Synths and full vocals.  Yet, the production seems to go overboard in many places, with a wall of sound that feels like the onslaught of 90125 and Big Generator releases.

Starting with the six part title track, keyboardist Geoff Downes (Buggles and Asia) along with guitarist Steve Howe lay down the "Fly From Here" theme.   Chris Squires powerful bass anchors the rhythm with Alan Whites drumming kicking  it into action.  The listeners mind is likely to be shocked by the uncanny vocals of Benoit David whom initially had temporarily replaced long time Yes member Jon Anderson who was on medical leave.  Benoit David came to Yes as the lead singer for the tribute band "Close to the Edge", and has contributed to writing and provides fantastic vocals on this 2011 release.  Legendary two-time Grammy Award winning producer Trevor Horn teams up again to produce this album.

For the lyric minded, Jon Andersons mystical themes are not present, which would have apparently been a blessing for former members Bill Bruford and Rick Wakeman, whom left the band due to Andersons themes.  Of course, for long time fans of early Yes, these themes are likely are what drew them in. "Fly From Here" is much more introspective and seems less mature lyrically.  Reading into the song titles "Life On a Film Set", "hour of Need", and "Into the Storm" it is easy to see that significant changes have occurred.

However, Steve Howe plays a wonderful piece called "Solitaire", which is derived from classical music.  It is easy to imagine guitarists stepping up to learn this great piece.  Sprinkled throughout the album are several solos and short interludes that continue to showcase his amazing guitar work.  Geoff Downes's keyboards are extravagant and pull from both modern and classic synth sounds.  His keyboards embellish the tracks with occasional licks tossed into the mix.  Careful listening will reveal multiple layers of keyboards, guitars, and vocals, a rich quality likely due to Trevor Horns production style.

"Fly From Here" is a must have for Yes fans, as it will likely be considered a classic in the long run.  However, for newbies to the prog-rock genre, it is recommended to start with their most well known releases, "Fragile" and "Close to the Edge".  Casual Yes listeners are advised to see if the album will grow on them first since this is still a departure from their classic 1970's releases.