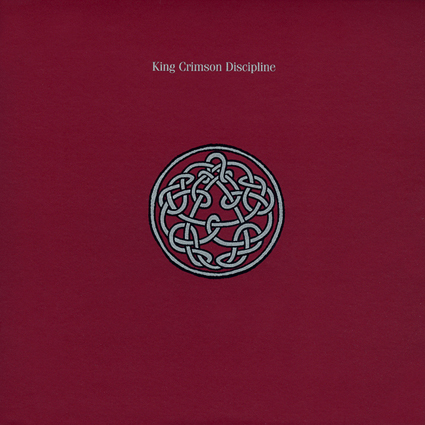 Discipline's ground breaking exacting guitar, bass, and drum parts marked an evolution for the most respected and creative progressive rock band.  The first of what would become a trilogy for Fripp's most capable team of technicians, which included guitarist Adrian Belew and bassist Tony Levin along with Bill Bruford on drums. This quartet is tailor-made for a vibrant, immersive surround experience. A good example is the midrange bass march of the title track, which percolates evenly all around you, with a split-second alternating of guitar parts between front and rear exciting the ear for a a total mind-melt.

Searing from the four corners the roaring middle and end sections of "Indiscipline" create a pile-driving density and controlled noise, all with a rich clarity one would expect from a surround sound disc.  On "Thela Hun Ginjeet," a commentary on urban crime and an anagram for "heat in the jungle," check out how the polyrhythms open up and breathe, attaining greater clarity in the much more vast soundstage provided by the multichannel arena.

Discipline hit number 41 on the Billboard Pop Albums charts in 1981, certainly propelled by the opening track "Elephant Talk,", which received attention from New Wave brainiacs who were into the likes of Talking Heads, R.E.M., and XTC. Belew's vocals are mostly isolated in the center channel, splashing a bit in the rear.  Check out his elephant guitar at 1:38, which bellows from front to rear, it is so easy to place yourself among a herd of pachyderms on an African plain. Of course when Belew recites the various synonyms for the noun "talk," the word "backtalk" pops up from the rear. Regardless of the expected novelties, the methodical riffing and synchronized rhythms from the four players on the remaining pieces converge on the listener with devastating  effect and are well served by the equal apportioning of those parts in the surround sound mix,

Like the previous 40th Anniversary reissues, listeners will find much more in this package, including both the new and old stereo versions joined by a set of rough early mixes in Fripp's original running order, a few alternate mixes, plus three video tracks from The Old Grey Whistle Test.

As usual the sound quality is superb to the point that the deep lows of Levin's Chapman Stick will provide an earthquake of enjoyment.  The glistening guitars and sharp drums maximize their brilliance on this release.  When I say, this album has never sounded better, this is not a marketing line,.  Surely my favorite mix of the collection thus far, well worth every penny paid and then some.