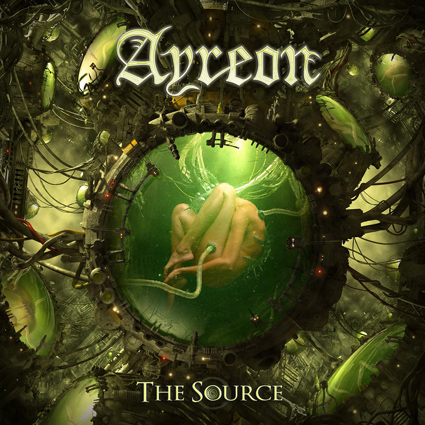 Ayreon first came to my attention with the release of The Theater Equation in 2016 which included a surround mix of their stage performance. Naturally I kept an eye on the band, thus when they release their latest studio record The Source I was excited to check it out. Whilst crazy prog metal is not a favorite genre for me, I was most curious how they would mix this album in surround. It is pretty intense, these top notch musicians create an amazing orchestrated blend that ranges across metal, acoustic, electronic, and many of the progtastic elements progressive and metal fans deem so cool.

So after checking out a few of their previous works, I comfortably can say that “The Source” stays true to their common thread which blends a huge musical theatre meets progressive metal soundscape. On this album they tell a relatively straightforward sci-fi story that actually is a prequel to their 2008 release “01011001.” But you won’t be left hanging, as the Story is self-contained, recounting how a computer decides to extinguish human life instead of following its original task of protecting it.

The 5.1 mix is truly immersive with Ed Warby heightening the energy with his powerful drumming. There is so much going on here, yet Warby is clearly front and center either directly from center channel or placed between the left and right front speakers. Nothing seems to be lost with excellent vocal and instrumental separation. Band leader Lucassen has created a multitude of superb arrangements that infuse thirteen vocalists soaring across the soundstage, along with an extensive number of instrumental flourishes that fill the room. One can hear among the industrial riffs the prog elements of Canterbury-inspired flute and Kansas like violin on “The Day That The World Breaks Down.”

Ayreon’s highly detailed writing is evident throughout what is effectively a 2 disc album. Dynamic melodies that drive the music are prevalent in literally every song. Yet, what is so very disappointing is that the DVD presents the 5.1 mix only in Dolby Digital. Such an excellent mix is deserving of a lossless codec, especially when it comes to the vast dynamics that have been squashed during compression. I felt a loss of energy in several places where the dynamics just couldn’t rise any further, but seemingly did just that when originally recorded, but now gone forever in this transfer.

Although I don’t object, surprisingly this is much more of a 4.1 mix. Sure the immersion is excellent, but I can’t help but wonder why lead vocals weren’t placed in the center channel, along with guitar solos, or other similar prominent parts that were otherwise placed between the front channels.

For high resolution audio enthusiasts like myself, it can be somewhat difficult to ascertain the aural intent of the mixing engineer. To my ears the overall sonic balance lacks warmth and a deep bottom, generally the mix seems a bit thin. Of course, this could be the fidelity that the engineer, producer, and band wanted to convey, but I feel once again that this is primarily the fault of transcoding using Dolby Digital. I get it, not everyone has DVD Audio capabilities, but it surely would have been nice to include a higher quality transfer for those of us who do!

The DVD contains a few very good videos, a making of film, plus some interviews and of course the stereo and 5.1 mixes. The Source is sold as a limited edition 4 CD + DVD set, which contains the album on the first two discs, and the instrumental versions on the second 2 discs. Optionally, a 2 CD + DVD version is available, which is the version reviewed here. It is possible that the deluxe edition contains more material on the DVD, but that is not clear at the time of this writing.

I can only recommend the Story for fans of Ayreon and surround mix collectors. Given the compressed quality of the audio on the DVD I can’t recommend this for high resolution music enthusiasts. Now I am off to hack the computers on planet Alpha.