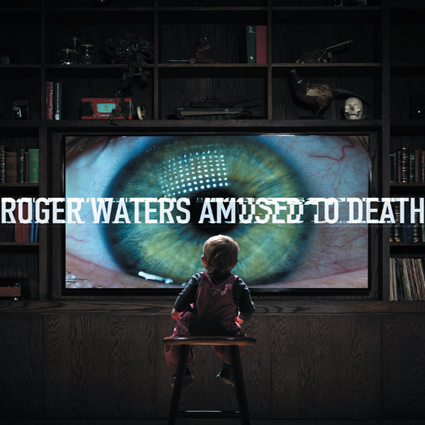 James Guthrie got back in the studio to re-mix Roger Waters aclaimed 1992 album Amused to Death. The re-mixes include both a 5.1 surround sound version and new stereo mixes. What is intriguing is this re-issue has been released on both Blu-ray and SACD formats, allowing all high resolution audio enthusiasts to access their preferred version. For some this is a no brainer, given that Pink Floyd's Wish You Were Here album was released in all formats, with critical acclaim going to the SACD version. Additionally, a limited edition picture disc vinyl version is available, but it apparently uses a remastered version of the original mix.

I selected to pick up the Blu-ray version, which comes in a flimsy box and has no accompanying video. My immediate thought was that this should have been an HFPA Blu-ray, which would allow direct access to the various mixes without the use of a monitor. Setting this shortcoming aside, it is really the sound quality and surround sound mix that makes this release so incredible.

Back in 2013, both James Guthrie and Joel Plante created the 5.1 and new stereo mixes along with handling the mastering all at Das Boot Recording. It took two years to get released, with numerous delays, and is finally in fans hands. Loved by many, Amused to Death tells a story loosely around the idea of a monkey randomly switching channels on a television while the songs explore various social and political themes.

Musically Roger Waters extends the Pink Floyd sound that became prevalent in their later releases, such as heard on the Wall and the Final Cut. Jeff Beck lays down some tasteful guitar solos that absolutely add to the tone of the album. There are fantastic dynamics that explode and sore through crescendos, among whispering moments that calm the listener into a meditative trance. But, it is the 5.1 mix that makes this journey so worth taking.

I’ll just say, add this disc to your reference quality list, as the hi-res 24bit / 96k multi-channel audio simply sounds amazing. Each part has been carefully placed within the sound stage, taking nothing from any other part within the mix. The lows are rich, but not over powering, and the top end is distinct and transparent. Take the sweet spot, as this mix encompasses the listener, yes there is plenty of action from the rear channels.

Several tracks have a really live feel, as if performed in a small stadium. Keyboards, guitars, and vocals slap off opposite channels from left front to back right, and right front to back left. But don’t expect much from the front center channel, as the bulk of the mix has been placed in the four main speakers. Maybe we should just say this is a Quad mix, an excellent one at that!

Without the SACD in hand, I can’t definitively comment on the differences. However, some fans prefer the SACD noting it is slightly warmer and smoother when compared to the Blu-ray. For the price conscious, the Blu-ray is your way to go, and for collectors the SACD will likely yield a higher price down the road. Either way, pick up one of these 5.1 versions, they are totally worth it.

CD & Bluray bundle, as well as a Hybrid SACD with 5.1 surround sound and stereo mixes, also available on vinyl.