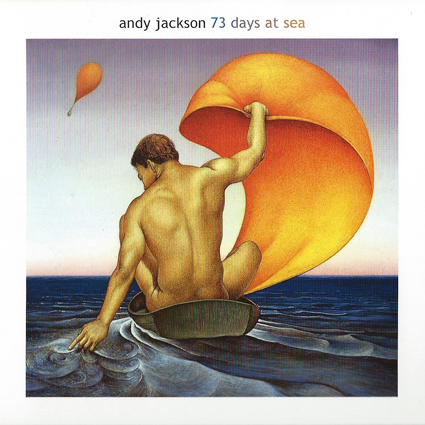 Many Floydian fans has been eagerly awaiting multi-Grammy Award nominated engineer Andy Jackson's successor to his 2014 debut masterpiece “Signal to Noise,” and the wait is now over. In late February 2016 “73 Days at Sea” hits store shelves featuring the 17 minute Drownings which includes sax work from former Van Der Graaf Generator member David Jackson and guest vocals Anne-Marie Helder of Panic Room. Continuing with his commitment to surround sound and stunning audio engineering the DVD contains a multi-channel 5.1 Mix and a 24 bit / 96 kHz stereo mix of the entire album.

Jackson has created a collection of songs linked by a theme inspired by time spent travelling back and forth to the sea, the edge of the world, whilst working on projects for others. He says “I noticed in myself a sense of nostalgia each time I went there, as if revisiting a childhood home. This was totally erroneous, I have never lived near the sea and have scarcely been to this particular place before. Still the ‘false nostalgia’ persisted. I resolved that I would write a suite of songs concerning the sea. The sea seems to occupy a pivotal place in our subconscious, as evidenced by its endless references in myth & legend. Eventually it became clear that the entire album was to be the ‘sea suite’, albeit that direct mention was sometimes fleeting”.

Unfortunately, I don’t feel this release lives up to his debut, since much of the material feels stiff, especially several of the guitar solos. However, the surround sound experience continues to demonstrate Jackson’s incredible creative force as an audio engineer. Instruments and vocals are extremely smooth and well balanced throughout the album, delivering an all-encompassing multi-channel aural journey.

Sticking with the current trend of mixing the main parts up front, which include bass, drums, vocals and other primary parts, Jackson embellishes the 5.1 experience with delays, some swirling parts, and cross channel movement. I appreciate the clarity of the recording, yet most likely due to the nature of the complex layers and mixing style, I never feel like the musicians are right in the listening room. There is plenty of depth, much of it created by echoes and delays, including the synth washes which are heavily used throughout this release.

From my perspective, the best pieces are the instrumental tracks, and the mix even excels during these segments, with layers firing from all channels. In Floydian form, songs meld together, creating one long piece.

Andy Jackson fans will likely want to include this in their collection, and surround sound enthusiasts who must have everything should certainly pick this up too.