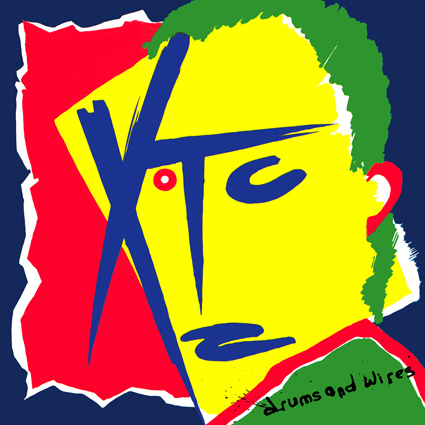 You’ll want to be making plans to pick up XTC's second in a series of expanded reissues, Nigel is there. Their 1979 "Drums And- Wires" gets the deluxe treatment which includes 5.1 Surround mixes, new stereo mixes by Steven Wilson along with high-resolution transfers of the original stereo mixes. The Blu-ray contains a bunch of extra audio and visual material too,

The CD / Blu-ray edition is housed in the same packaging at their first surround release Nonsuch, which follows the majority of King Crimson's 40th anniversary series packaging. There is an expanded booklet along with sleeve-notes by Andy Partridge, Colin Moulding and Dave Gregory. The CD also includes 6 additional singles and non-album tracks. The Blu-ray includes a 5.1 surround mix of the entire album, and both new and original stereo mixes in 24bit / 96kHz LPCM Audio. There are several additions on the Blu-ray, so really, this is the version you will want to get. These include numerous additional stereo and 5.1 tracks, along with instrumental mixes of the album, 5 demo sessions and promo films for the singles Making Plans for Nigel and Life Begins At The Hop.

Steven Wilson is still one of the masters of surround sound, and he demonstrates this right out of the gate on Drums and Wires. As the opening track "Making Plans for Nigel" kicks in the drums beat from the rear channels and progress to the front channels as the rest of the band comes in. Guitars reverberate from the front right channel to the rears, while the accent secondary vocals "wha-hoo" from the back left channel. There is good use of the surround channels throughout the album, but the primary energy of the mixed is focused up front, a common multi-channel mixing style for Wilson.

With a change in band members, a new writing direction emerged for XTC. Digital reverb had arrived, which is so very evident with the big snare drum sound on many of the songs on XTC's third album. As one would expect, Wilson has done an excellent job at reproducing these effects, keeping true to the original mix as close as possible. Naturally, with the surround sound stage, the use of these reverbs has depth from front to rear, not just across the left and right channels. Vocals spread widely from the center channel across the fronts and hitting off the rear channels on "Day In Day Out," an excellent example of the creative license used to bring this album into the 5.1 erana

The fourth track, "When You're Near Me I Have Difficulty" with its many parts provides an onslaught of aural ecstasy with backing vocals, keyboards and guitar parts coming from the rear while the bass, drums, guitars and vocals are up front. In general I feel the bass is pleasantly overpowering, it really rounds out the bottom with a nice grumble. Lower and upper mids are very clear, but there is a significant difference between the DTS MA and LPCM 5.1 versions. The later is much brighter, closely mimicking the new CD mix and its companion LPCM stereo mix. On the other hand, the DTS MA 5.1 lacks the brightness, and in my comparison is closer to the audio spectrum of the stereo Sire CD version I have, albeit with a much deeper bass on account of the sub-woofer channel. I am hard pressed to say which multi-channel version I enjoy better, as they each have their own benefits. However, I am truly surprised there is such a vast difference in how they sound.

I admit that I had some confusion regarding the track ordering, as my original CD sandwiched three bonus tracks between what had originally been side A and side B on the original 1979 vinyl release. These bonus tracks, among others are included both in stereo and surround in the Extras section, although only in stereo when playing from the Original album Extras menu, while available in surround in the 2014 Additional Mixes menu. There are plenty of other extras including videos and instrumental versions. A fans treasure trove of music, the complete 12 track album and nearly a dozen bonuses, plus more!

This classic New Wave release truly demonstrates how XTC was one of the most inventive bands of the era. This is a comprehensively expanded edition of a much loved classic. Drums and Wires is certainly a must have for any XTC fan, as well as surround sound enthusiasts that wish to bolster their collections with great 5.1 mixes. This expanded re-issue will not be a disappointment.

CD and Blu-ray or CD and DVD.