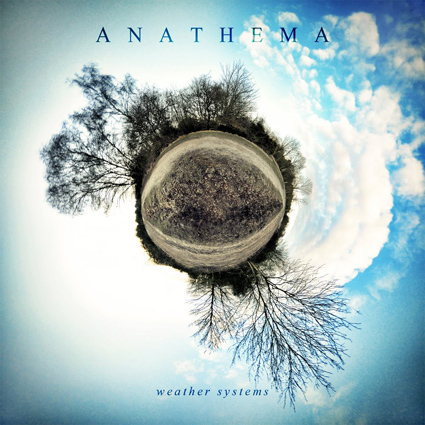 Anathema formed in Liverpool in 1990 and has embarked on a remarkable musical journey originally debuting as a doom death group and transforming into an atmospheric progressive band. Recorded in Liverpool, North Wales and Oslo, Weather Systems is their latest album produced and mixed by five times Norwegian Grammy nominated Christer-Andre Cederberg (Animal Alpha and In the Woods). Everything from the production to the writing to the performances are a step forward from their previous work.

Following up on their previous release Falling Deeper with its reliance on chamber orchestration the band has become comfortable with string arrangements by Dave Stewart, which are used abundantly, and to great benefit on Weather Systems. Daniel has written a set of songs that are more daring, harmonically ambitious, and poetically sophisticated than anything he's previously attempted. Keybaordist/vocalist Vincent arranges them for the band, which also includes drummer John Douglas,

The surround mix is lush and fills the space with many layers of voices, strings, and synths, among other instruments.  Tonally the surround version found on the DVD is lacking in brilliance and depth.  This poor quality is likely attributed to the fact that this is not DVD-Audio uncompressed 6-channel surround, but DVD-Video 5.1 surround with DTS data compression. While still an improvement over CD and available as a multi-channel version, DVD-Video requires compression, while DVD-Audio can render up to six channels of uncompressed audio at high bit- and sample-rates.   The good news is a FLAC 5.1 48kHz/24-bit uncompressed version is available for download at Burning Shed.  Audiophiles will likely need to burn the FLAC 5.1 to a DVD-Audio disc using Cirlinca.

The album opens with, "Untouchable, 1 & 2", starting with an almost folky acoustic ambience, which gives way to a driving rock anthem, turning to a softer interlude by way of a lovely duet, soaring into an instrumental which ends gently.

Continuing with this general model "The Gathering of the Clouds", incorporates pulsating and swirling orchestral components tastefully placed among the various surround channels.  Lee Douglas' bright vocals show up on "Lightning Song", which slides into great heavily orchestrated rock from a new age beginning. A taste of their roots can be found here and smattered around on a few other tracks.

Just as we are settling into a particular musical language, "The Storm Before the Calm" reverts to what we might expect of Anathema. A harsh chanting vocal, over a all of sound and electronica of sorts, and some arcane lyrics, these hints come later in the album. There is a percussive angularity that rears its head here, but they can't keep the bleakness going, eventually settling into a finale.

Overall this is a worthy release for inclusion for fans of progressive, atmospheric, and the doom genres.  While it is hard to pardon the exclusion of a lossless multi-channel version, alternatives exist, such as a stereo vinyl version and the FLAC 5.1 24bit/48k high resolution download.