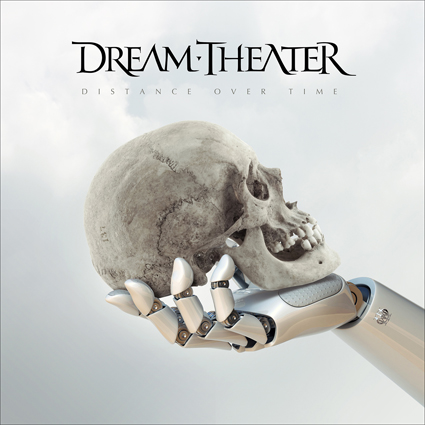 Dream Theater have sold over 15 million records worldwide and are a two-time GRAMMY® Award nominated band known for their special blend of progressive metal. For this 2019 release, “Distance Over Time,” the band decided for the first time to really approach making the album differently, living; writing and recording together at the secluded Yonderbarn studios in Monticello, NY over the period of four months

While developing a more organic sound on their fourteenth studio release, Dream Theater has maintained its unique signature of combining Metallic aggression and Progressive ambition. The album Distance Over Time seemingly deals with difficult topics, all while reflecting the spirit, joy and passion that the band has put into making this music.

For high-resolution and surround sound enthusiasts, Inside Out music has released a few editions which includes the album in 5.1 surround sound with video animations. In the spring both a limited artbook 2 CD, 1 Blu-Ray, and 1 DVD edition, and a super deluxe that contains the same media as the artbook edition along with adding in vinyl were made available. These both include bonus track, instrumental mixes, and hi-res files of the album, plus stems for the track “Untethered Angel.” Also, fans will find extended liner notes, additional artwork featuring photos from the writing session, and additional video content. Then in the fall a 1 CD + 1 Blu-ray digipack special edition was released, containing the same material as noted above on the Blu-ray, which is reviewed below.

Distance Over Time is the band’s third album to receive a 5.1 treatment with the previous two releases, Systematic Chaos (DVD-V in Dolby Digital) and Dream Theater (DVD-A), mixed by Paul Northfield and Richard Chycki respectively. While Chycki had a limited hand in the recording process for Distance Over Time, Ben Grose took on the mixing duties at the Mix Room in Burbank, CA.

In the simplest of words, this is an incredible sounding Blu-ray which contains DTS HD Master Audio 5.1, LPCM 5.1 and 96k/24-bit lossless stereo versions of the entire album. However, the 5.1 mix is very front focused, creating a wall of sound which massively stretches across the three front channels. The back channels primarily take on ambience, with a light touch of discrete elements such as keyboards and backing vocals that tastefully accent the exquisitely wide mix. Balance across the mix is remarkable with incredible ease of clarity to all parts, and switching between surround codecs yielded no appreciable difference, making a choice of either the DTS-HD MA or the LPCM surround mix a personal preference.

The center channel thumps with the kick and snaps with the snare, but vocals and other parts typically emanate ambience, providing some focus to the soundstage. Surround immersionists like myself still are likely to feel satisfied with the 5.1 version as it dramatically opens up the mix and does offer an artistic use of the back channels. Guitars are vivid and comfortably tuck under the rich and dynamic vocals. The overall transparency of Distance Over Time is systematically perfect. The album is filled with precision playing, soaring guitar solos and hammering drum work.

When flattening the mix to the stereo layer one can hear a minor color change in the overall tonal balance. The snare fattens up and even the guitars top edge rolls off a bit. I attribute this subtle difference to the spreading of ambience across the surround version. As a multi-channel fan, I find the 5.1 mix preferable to the stereo version, but the music is still clearly conveyed with all of its power and dynamics on the hi-res stereo mix.

Throughout the entire album not only will your ears be treated to incredible audio, but the visuals that are unique to each track are absolutely fantastic. They are very fitting to the storyline and I wish that more bands would step up like Dream Theater with videos like these. Of course, the band seemingly has a massive production budget, which is strongly emphasized in their live shows too.

Strongly recommended for Dream Theater fans, surround enthusiasts, and collectors of progressive rock. Actually, get this album, Dream Theater will make you a fan with their spirited songs and awesome audiophile quality sound! The price of the CD + Blu-ray edition is very fair indeed, so it really should be hard to pass this one up.