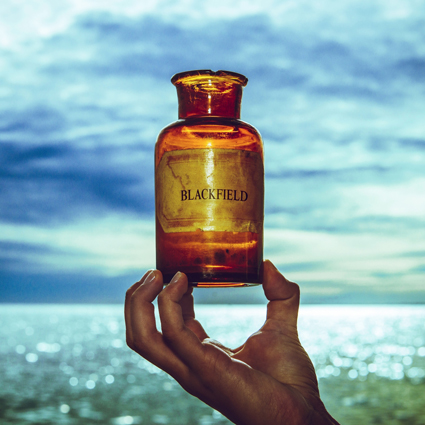 On their fifth album titled “V”, Blackfield has linked together 13 songs that form a flowing 45 minute ocean themed song cycle. Returning to full collaborative mode, the duo comprising of British musician and producer Steven Wilson and Israeli songwriter and musician Aviv Geffen, handle vocals, guitars, and keyboards, including guests Tomer Z on drums, plus Eran Mitelman adding keyboards, and the London Session Orchestra rounding out some songs. Alan Parsons known best for his legendary work as a producer and engineer also works on three of the album's key tracks.

Written and recorded over a period of 18 months in both Israel and England, Blackfield “V” deluxe edition contains a CD and Blu-ray edition with the entire album in high resolution stereo and 5.1 surround sound. The pair makes for a formidable musical force with upmost attention paid to delivering the material in high audio quality.

Unfortunately the multi-channel Blu-ray version of this release has been extremely constrained. I received no response from the label regarding the problem, and apparently no one state side received copies pre-ordered through Amazon. By the time I recognized that demand may have out stripped supply, my sources abroad (Burning Shed) were already out of stock. Prices started to accelerate, and a third-party order from Amazon UK was lost in shipment. Five months after the original release date I finally received a copy from a regional store in Finland, and I am delighted to provide my review.

Of course, most readers of reviews want to know if it is worth their money to purchase a specific disc. Since this limited edition is apparently already out of print, I must first say my comments are strictly related to a reasonably priced edition (about $30 US), anything above that is your willingness to pay a premium. Naturally, as a progressive rock fan, and collector of surround sound music, I am clearly disappointed that this product has such limited availability.

Musically the album is in the middle, neither bad nor great. I hear moments of excellence, but tend to feel that many of the songs are under developed, and too limited a time was spent on the recording and mixing. Yet, I also find V to be a pleasurable listen, and can easily find my self lost in the music, which is my barometer of an album that passes this audio enthusiasts test.

The Blu-ray contains both a DTS HD Master Audio 96/24 5.1 and LPCM 96/24 5.1 option, along with a 96/24 Stereo LPCM version. Tonally, the both surround codecs sound virtually the same, however the LPCM codec appears wider and I sense more depth across the soundstage. The stereo version is a complete shock and loses all of the impact of V for me, thus marks another example of why I prefer multi-channel music.

Family Man has already become one of my favorite tracks, with the cranging guitars thrusting from the rear channels, while vocals are up front in the center. There is a fantastic sense of space that spread the various parts around the room, allowing for plenty of definition to be heard. You may be surprised to discover that mix meister Steven Wilson was not at the controls here, Simon Bloor made it all happen with guidance from producer Aviv Geffen.

There is a broad sense of space on Sorrys, which opens with a guitar between the back channels and vocals crooning from the front center. Backing vocals seemingly fall all around as they reflect from the front to the rear speakers, with piano filling the space in the front left and right channels.

Dynamically this is a good release, yet it is easy to hear some light compression on the lead vocals, and instruments that don’t seem to reach their potential tonal quality. Possibly this is intentional, as it lends an air of rawness which one may hear at a live show. As a former engineer, I recognize that every ear is different, and each producer and engineer combination yields an entirely different result. Yet, I am of the belief that simply there was not enough time to adequately take the project to the next level due to the busy schedules of collaborators.

That leads me to The Jackal, which has been masterfully produced by Alan Parsons and mixed by Steven Wilson. Wilson’s electric guitar is chunky and gritty as if falls beteen the front speakers, with Geffen’s vocals soaring from the center channel. Bass is expressively resonate with a brilliant snap to the snare drum. While the back channels play second to the overall mix, keyboards and an engaging guitar solo surround you. The Jackal feels very complete, and this is likely the best example of the true potential of Blackfield.

With slowly rotating pictures throughout the album, and a high caliber of rock songs that lean progressive, Blackfield V is recommended for true fans and high resolution surround collectors who must have it all. This is not a five star release, but certainly worthy of the wait, and I am glad I persisted in searching out a copy for my collection. Now, will you?

Please see below for a link to an online store that will ship worldwide, or if you happen to live in Finland, by all means stop in and grab the last remaining copies before someone else does! These may be the last reasonably priced copies available.  Also, please do me a favor and click the Like and Share buttons below, especially if you purchased the limited edition Blu-ray through the link below!