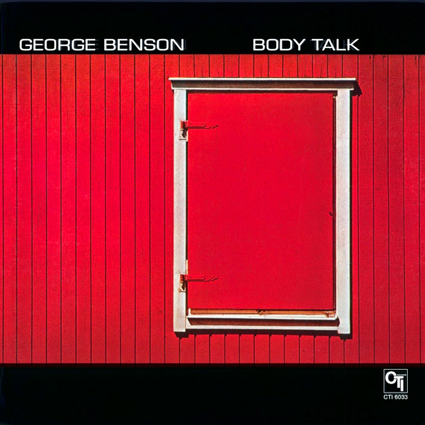 With electrified jazz gaining greater appeal, and taking a cue from the popular R&B stylings of the day, George Benson set out to release Body Talk in 1973. His formidable guitar playing takes on any kind of groove, all held down by the jazzier rhythm section of drummer Jack DeJohnette and bassist Ron Carter, with electric pianist Harold Mabern, percussionist Mobutu, and guitarist Earl Klugh, who tosses in several tasty moments.

The album was released both on stereo and quadrophonic LP back in the day, and now has been masterfully transferred to quad SACD by engineer Michael Dutton for his Vocallian label.

I am not opening Pandora’s box for audiophiles who prefer Blu-ray over SACD, but I will simply say this disc does sound spectacular, and can easily put to shame many of those top rated surround Blu-Rays. There is a wonderfully natural analog sound with silky smoothness that emanates from all four channels. Don’t get fooled if your disk player shows the surround layer as 5.1; it is only 4.0, merely bringing the quad era into the digital age.

The opening track “Dance” certainly gets my feet tapping and body moving. Klugh’s guitar funks out in the rear left channel while Mabern electric piano syncopates the rhythmic groove in the back right. The core rhythm and Benson’s stylish soloing spread across the front channels, making for a lovely well balanced expansive surround mix.

The next track, “When Love Has Grown,” takes on a jazz club feel, following the same mix layout, less the second guitar. As a fan of the electric jazz guitar sound, the tone and ambience surrounding Benson’s playing is remarkably life like. I hear the subtle fuzziness and warm overtones, plus when he takes to octave riffing, the magic truly kicks in. Mobutu’s percussion percolates from the back left, giving his part a wonderful discrete characteristic.

“Plum” expands the soundstage dramatically with big band arrangements from Pee Wee Ellis that spread across the front channels. They appear to hit from the rear with the keyboard accents, allowing for a sound that expands out into the listening room. Any studied guitarist will be in awe at the tremendous solo work laid down by Bensen, and drummers likewise can drop their jaws at the tasteful playing from DeJohnette. Furthermore, his drums have a genuinely open feel, although the kick possesses the lifeless dull thump common to recordings of that era. Dutton has truly done magic with striking a perfect balance across the spectrum. This disc is so warm, that I feel like it is vinyl without the surface noise, pops and clicks!

While I give this SACD the highest marks, I do wish that there was a bit more resonance from Carter’s bass. Having worked with him in the studio several times about 15 years later, I know his sound can be very full. Of course, different instruments, different times and technology all count, and realistically this is what was captured during the sessions and mixed into the quad master. The DSD Stereo layer almost seems like there is just a bit more on the bottom of the bass. However, I think that is my wishful imagination, as the overall mix sounds equally as balanced, warm and dynamic. Of course, the stereo layer loses the separation of the percussion, second guitar and keyboards, creating a mix that still blends very well without being cluttered.

If I haven’t made it clear by now, this is an emphatically positive review for the SACD quad edition of Body Talk on Vocallion. It is highly rated by jazz lovers, making it another must have for fans of the genre. Guitarists are also advised to grab this release, as Benson hits many high marks with his playing. The sound is fantastic and the quad mix wonderfully discrete. No, you won’t find ear candy here for those who seek wild movement, instead you’ll find yourself placed in the room with the band around you. Now, that is a place I enjoy, and when you get your copy, you can too!