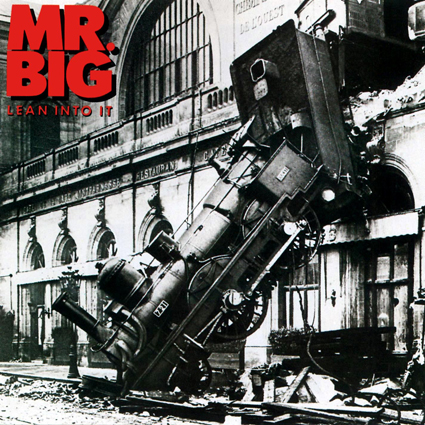 30 years after its original release in 1991, “Lean into It” by Mr Big has been reissued on both SACD and MQA-CD. The super group consists of riffing guitarist and backing vocalist Paul Gilbert, Eric Martin soaring on lead vocals, Billy Sheehan holding down the bottom on bass and backing vocals, and drummer, percussionist, and backing vocalist Pat Torpey, with the group plying their brand of hair metal into the broader heavy metal genre. Lean into It became their breakthrough album, peaking at number 15 on the Billboard 200 charts, while the single “To Be with You” became the band's first and only song to hit #1 on the Billboard Hot 100. The follow-up single, “Just Take My Heart,” ranked as a Top-20 hit, peaking at number 16 on the Billboard Hot 100.

On this platinum selling release, the band stripped away super flashy and lengthy solos, simply creating songs focused on rhythm, groove, and strong melodies, many which included lightning-fast catchy riffs heavily fashion from the sound of 1970s glam rock. The evoXS record label has remastered the album using a hi-res digital transfer from the original analogue master tapes for a few formats including an MQA-CD, a hybrid SACD, a 180g Vinyl LP, Atmos Streaming and a Hi-Res digital download. Of greatest interest to readers here will likely be the hybrid multi-channel DSD 5.1 SACD, which also contains a 2.0 DSD layer. Alternatively, for stereophiles the 2 disc MQA-CD delivers the sound of the master tapes when connected to a MQA enabled device. Disc 1 of the MQA edition contains the remastered tracks from the original album while disc 2 contains previously unreleased Kevin Elson produced tracks: Stop Messing Around and Wild Wild Women, plus hard to find bonus tracks, along with versions without bass and guitar tracks designed for musicians to jam with the band.

Sitting down for the surround version find the album opening with an effect mimicking the starting of a motorcycle on the track “Daddy, Brother, Lover, Little Boy.” As the starting engine moves slightly across the front channel a horn like sound emanates from the back channels moving forward into the front speakers, all making for a really impactful opening in the surround space. Yet, on this song the focus remains broadly upfront with a strong emphasis on the center speaker and reflective ambience placed in the rears. The sound quality is rich and very warm, full of life, with a ton of power in the base range, making for an excellent rock mix.

There continues to be a strong use of the center channels for lead vocals and blending of bass and drums, creating a fantastic discrete isolation to those elements within the 5.1 mix. Guitars vibrantly crank out from both the left and right channels creating a very wide spatial feel, with the backing vocals pouring out of the back channels along with some secondary guitar parts which complement the primary guitar parts. “Alive and Kickin” adds in fantastic guitar solos that are nicely parked behind the sweet spot.

While the back channels provide strong ambience which give good depth to the mix, Mr. Big presents a wall of sound that is undeniably powerful. This speaks to why I absolutely am enthralled with the depth an open space heard on the reeling guitar at the start of the third track “Green Tinted” which falls comfortably behind the front speakers. The snappy guitar has a completely dynamic and rich sound quality that hits hard and adds punch to the mix while the base is stridently resilient and filled with gravity and incredible power.

Squealing guitars in the rears are abundant on “Lucky this Time” adding to the crunchy guitar work up front. Surround engineer, Chris Bell, creates a wonderful separation across the front channels with discrete embellishments placed in the rears adding some extra chunkiness at moments during this track. I wholeheartedly find the dynamics to be fantastic and the mix to be extremely well balanced

Mixing engineer Chris Bell comments, “This project was really perfect for the Dolby Atmos format. Original producer Kevin Elson had so many great sounds to work with from the original multi-tracks. I was able to take advantage of the ambience tracks that were recorded with the ceiling speakers to make the listener feel like they are in the room with the band. Each song had plenty to work with. Kevin Elson was using around 35-40 tracks per song, so I was able to use all the space this format provides wrapping the sound around the listener but staying true to the stereo mixes.” While not reviewed here, the Atmos version can be heard through Apple Music.

The overall power still pours from the front channels on the fifth track “Voodoo Kiss” with expansive use of the surround space wherein guitar riffs wail and soar from the front left to the back right channel. The slight ambient delay in the back speakers provides for a night club like sound that is very lively. When you are sitting in the sweet spot you will have to look all around as the lead guitarist run circles around you during his solo. This kind of surround mixing technique truly makes for a fun hard hitting glam rock mix, maybe even with big hair and tight flashy fashion wear to boot.

For those not yet familiar with Mr. Big, “Lean Into It” can best be describe as loud rock music that one may find in a local bar or pouring out of someone’s garage. Of course, their hair metal, hook filled guitar riffs and musicianship have taken them into stardom, with supersonic vocals definitively drawn from the classic 1970’s glam rock genre. In many ways they remind me of a heavier version of journey with some roots leaning towards the blues side of town.

Their second big hit “Just Take My Heart,” is a beautifully open ballad with a chorused guitar that spills from the center channel into the back speakers blending with the clave tapping from time to time also from the rears. The openness and reflective nature extends the space across the listening room, well beyond the boundaries of the speakers, pushing further outwards.

Overall Lean Into It provides an immersive mix that adds in some fun discrete use of the back channels including the background vocals at the start of “Road to Ruin.” Plus, check out the vibrant sound of the acoustic guitar solo on the ballad “To Be With You,” which is airy and very open. Vocals are snug and extremely distinct throughout the entire album, offering plenty of dynamics with ample transparency.

When you are ready to fold down to the stereo mix, audiophiles should also find this version to contain outstanding sound quality. Sure, there is a slight coloration difference between the surround and stereo mixes, which is to be expected, given the different eras of when they were actually created. Specifically, there is a slightly increased roundness in the lower region on the surround mix while the stereo version offers an extended brightness. I found that when I really want some zippiness to cut through whatever else is going on, the stereo mix becomes my first choice. But, when I want to sit down for an attentive listen, my ears much prefer the more analog feel of the surround mix. Still for stereo audiophile’s original producer Kevin Elson developed a fantastic depth of the soundstage which can be heard on the stereo layer, and I can clearly feel the band falling behind my speakers and creating a wall of sound from a stage out into my listening room. Yet, no matter the version I still feel like I am at a nightclub rocking to Mr. Big.

For fans of Mr. Big, the SACD is a must have, or even the MQA-CD for those seeking to upgrade their sound quality from an earlier edition. For surround collectors, this is an intriguing mix that distinctly shows off how the surround scape can be used to dazzle the ears and provide extended depth. For heavy metal fans, glam rockers, and hair metals enthusiasts, Lean Into It will provide plenty of rockin’ joy, with riffs and hooks galore.

Hybrid SACD with DSD 5.1 and 2.0 layers.  Also available as a 2 disc set including a stereo MQA-CD, or as a 180g Vinyl edition, and as a high resolution download.  Atmos mix available through Apple Music or preview on other streaming sites too.