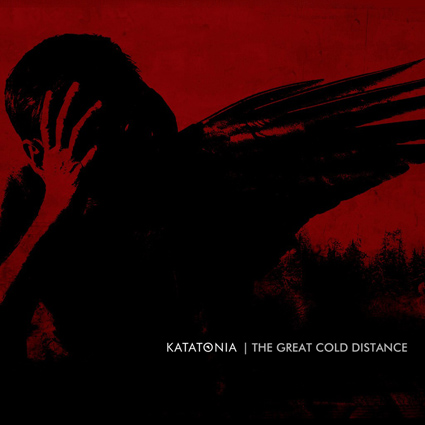 Hailed as one of the leaders of the death-doom genre alongside My Dying Bride and Paradise Lost, Sweden’s Katatonia have spent the last 25 years ever changing and evolving to become the much loved purveyors of dark progressive rock/metal we know today.

2016 marks Katatonia’s 25th anniversary and 10 years since the release of probably their most well known work “The Great Cold Distance.” So what better time than to re-issue this album as a special edition CD / DVD four disc set as well as in vinyl versions? Founding guitarist Anders Nyström says “Looking back at our set lists from a historic perspective, it dawned on us that there’s been no other album from which we played more songs.” Thus fans now can enjoy the ultimate edition which includes all the scattered bits and pieces related to The Great Cold Distance.

Recorded and mixed at Fascination Street, Örebro Sweden, and produced by Nyström/Renkse, plus co-produced, mixed & engineered by Jens Bogren & David Castillo, the album features 3 singles, “July,” “My Twin,” and “Deliberation.” The new 4 disc deluxe hardback 40 page book edition of the album includes 3 bonus discs featuring bonus songs and b-sides, a new 5.1 remix of the album by Bruce Soord, plus a live performance recorded in September 2016 of the band playing “The Great Cold Distance” in its entirety with the renowned Plovdiv Philharmonic Orchestra in Bulgaria.

While we are reviewing the DVD version here, vinyl lovers can pick up the double gatefold LP version of the original album that also includes the b-sides & bonus material. Pressed on both black vinyl and limited edition red vinyl, act fast to secure your copy which are on sale now at some stores! Further note: A 2009 5.1 mix is also still available through Amazon USA for those who are interested, but after a friend loaned me a copy, I can safely say the new mix is a night and day improvement. I can easily understand why the band wanted to create an entirely new surround mix.

Soord has maintained a relatively consistent surround mix throughout the album, placing bass and drums up front with lead vocals emanating from the center channel. Guitars crang from the front left and rights with reflections delayed from the back channels. Adding to the surround scape, second parts accentuate from the rear channels, helping to create a moderately immersive mix.

The dark energy of Katatonia is exemplified by a tonal balance that leans toward the mid range and held deeply at the bottom. Although the snare lacks a strident snap, its richer thwap is clearly defined. Even the guitars are rolled off at the top end, yet still strongly thrash through the very musical progressive leaning songs.

In psycho acoustics distortion is a tricky thing, listeners often will find they have become exhausted after hearing distorted sounds for a while. Part of the key is the audio delivery needs to be clean and as true to the source as possible. High resolution music fans are keenly aware of this, commonly kicking back to lossless hi-res audio while listening on audiophile equipment. The Great Cold Distance has been presented in both Advanced Resolution Surround MLP 24bit / 96k 5.1 and DTS 24bit / 96k 5.1 surround, lending to a pure mix that caused no fatigue. There was little difference between these two codecs, which is what one should expect, but often is not the case. However, the LPCM stereo layer is distinctly brighter, altering the balance and aural quality of the music. Although the stereo mix brings out the keyboard parts and adds zest to the cymbals, I did feel somewhat burned out and much preferred the 5.1 mixes

Dynamics are moderate and the overall balance is fantastic on the surround mix. Soord tastefully uses the back channels while giving primary weight to the front. Given the intensity of this music transparency is usually masked but evident during a few quiet passages that link sections or are intros and ending to songs. The sound stage is good and the MLP 5.1 mix is my first choice.

As a bonus, fans also get an entire concert of the album played in its entirety and mixed in surround and stereo. You’ll want to confirm that all channels are firing on the 5.1 mix as boxed copies are missing the back left channel. Ask for a replacement disc from your seller. Until I receive my replacement copy, the stereo mix has become my preferred choice for the live version of the Great Cold Distance.

Released in a large format book containing plenty of glossy pictures with lyrics and credits, this set is designed for the deep pocketed fan. Without the first 5.1 on hand, I can’t say how much of an improvement this version would be. I can only recommend this deluxe edition for completists, Katatonia fans who must have everything, and curious surround enthusiasts with extra cash to spare.