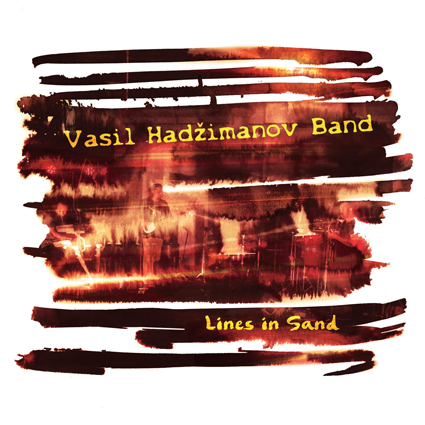 Somehow, I unfortunately missed the debut release from Vasil Hadzimanov Band when it was released on MoonJune Records back in 2016. Now, two years later their stylistically varied fusion heavy sophomore album “Lines In Sand” is engaging my ears with their virtuosic talents. Blending ethnic influences with jazz, rock riffs, psychedelic and funk, the Serbian based group has produced a delightful hybrid of music, punctuated by brilliant improvisations, interesting time signatures, and tight syncopations, all flowing organically together.

The album is available on CD or as a HD lossless download through their BandCamp page, I found the overall sound quality of the stereo mix to be outstanding. The 44.1kHz / 24-bit sound quality is absolutely brilliant, with deep lows and clear highs. Dynamics are very good with excellent imaging and a wide sound stage. I listen for musicality when digging into an instrumental release like Lines in Sand, as the flow, textures, and nuances of each part can so easily make or break the overall mix. Recording engineer Marko Peric has absolutely captured all of the details during the sessions at Binta Sound Studio and German Ambassador's Residence, in Belgrade, Serbia.

Each song takes on their own characteristic, with the second track “Mr. MoonJune” paying honor to the record label founder Leonardo Pavkovic. This initially funk driven piece hits off with the very open sounding groove-oriented guitar work of Branko Trijic. Miroslav Tovirac adds super funky Bass parts that are carried by the hard hitting drumming of Pedja Milutinovic. Yet the piece transitions with great ease into crystal clear standard jazz acoustic piano solos from Vasil Hadzimanov that become folded under an intensified fusion layer.

There are points on the album when the ambient space of the studio are distinctly heard, giving a wonderful live feel to the mix. Guest lead vocalist Marta Hadzimanov brings in a angelic side to the fourth track “Lost,” which absolutely are reminiscent OF Flora Purim’s performances on the early Return to Forever releases. This magical song stretches into an incredible guitar solo with deep fusion roots and returns to the airyness of Hadzimanov’s vocals. Songs meld into one another, making the album seamlessly flow from each piece to the next.

The seventh track “Maklik” reminds me of the psychedelic jams from the band Umphrey’s McGee, with synth parts swirling out from the front of the speakers and the rhythm driving along the infectious piece. The ever-present kick drum solidly pumps while the effect layered snare drum whaps along. The album immediately grabbed me and has continued to become more enticing with each listen. Lines in Sand already has become one of my favorite releases in 2018, it is another high mark from MoonJune, and I am so ecstatic that the label continues to bring these amazing albums to the world.

This album is wonderfully fresh with a vibrant soulful touch blended with sparkling conviction. I absolutely recommend it for fusion music enthusiasts and those who seek to be thoroughly engaged. It boasts rich textures, wide sonic excursions and great dynamics perfect for High Resolution enthusiasts. The album is so satisfying that I don’t think it should be overlooked, check out the stream and hear it for yourself, I am certain you’ll want to add this to your collection.