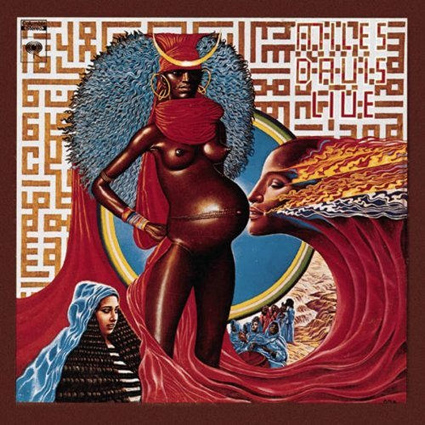 By 1971 Miles Davis already has an esteemed career that peered through his many musical visions. His “Live-Evil” release of that year spread his diversity over two LP’s giving fans two distinct sides of Miles. Documented here are two very different settings for his bands. The first disc is a selection of a December 19, 1970 gig at the Cellar Door in Washington D.C., which featured a band comprised of trumpeter Miles Davis, bassist Michael Henderson, drummer Jack DeJohnette, John McLaughlin on guitar, Gary Bartz blowing the saxophone, Keith Jarrett on organ, and percussionist Airto Moreira. Listen in to these tunes that groove hard and fast, leading to the great funkiness that shows up on future releases. The second band found on these discs was recorded in Columbia's Studio B in New York City and substitutes Ron Carter or Dave Holland on bass, plus added Chick Corea and Herbie Hancock on electric pianos, all while losing the guitar on the tracks “Selim” and “Nem Um Talvez,” and swapped Steve Grossman over Gary Bartz while adding Hermeto Pascoal on percussion and drums in one place ("Selim"). The studio sessions were actually recorded in June, a few months earlier than the live dates.

As part of the early push into Quadrophonic, “Live Evil” was released on QS quadrophonic vinyl back in the day, and now nearly a half century later it has been transferred into the digital domain and released on multi-channel SACD. This Japanese hybrid SACD edition contains both quad and stereo DSD layers and is housed in a 7inch cardboard sleeve packaging with a sticker featuring the artwork.

While I really like the larger packaging for a variety of reasons, I also find it a bit of a hassle to unpack and handle the SACD, which correlates similarly to a vinyl record by first removing it from the outer plastic protective sleeve, followed by the cardboard sleeve, then the inner plastic sleeve, and finally popping it off the supporting plastic flat tray. However, I digress, the classic vinyl feel and enclosed booklets make up an excellent package that is filled with two SACD’s full of some of the most powerful electric jazz ever recorded.

For those wondering why the SACD is still the preferred format for many high resolution releases, I often think about this myself. From a technical standpoint, a conversion from DSD to PCM audio would yield a lossless file that is close to 24-bit / 96kHz, thus sound quality wise listeners are getting an excellent codec. Simply put, SACD’s load really fast and are simple to navigate. Both DVD-A and Blu-ray’s can carry complex menus with load times that seem interminable. But a huge advantage is the difficulty in copying the material, and for this reason alone, SACD’s are a much better choice for record labels.

OK, it really does come down to sound quality, and that is why I write these reviews. As a multi-channel enthusiast, I prefer to skip poorly mixed and lousy sounding releases. I am sure other enthusiasts also don’t want to needlessly spend money on releases that aren’t up to par, especially the pricier box sets. I can immediately say that Live-Evil is worth every penny, provided the music moves you. This album is not for everyone, it stretches the boundaries of jazz a bit into the avant-garde. The music can be heavy and dissonant, yet this is precisely what makes Live-Evil so remarkable for many fans like myself.

For the inquisitive, let’s be clear, this is a quad disc, although the channel layout indicates there are 5.0 channels, the center channel is not used. The mix is all encompassing with the band fully surrounding the sweet spot with drums spread across the front channels, along with Davis’ trumpet, the sax and keyboards. The bass has been planted in the back right channel but does extend across to the back left where McLaughlin’s guitar sits.

The instrument layout is by no means consistent throughout the discs, and right from the start of the first track “Sivad” detailed above there is a good amount of separation and openness across the soundscape. Drums are somewhat distant, with a natural sound that likely is representative of the acoustic space of the night club. Down to the amplifier buzzing and warm bass these live recordings absolutely open up on the quad mix. While I am thrilled with the dynamics and overall clarity, I also must comment that the limitations of tape saturation, noise floors, and similar aspects of analog technology lead me to an awareness that this would be a much more resilient recording if made today on high resolution digital equipment. However, the charm of the harmonic distortion and push towards full saturation would lead to a much less organic recording that truly is representative of the era.

Although audience members are typically treated with sound pouring from the stage, the quad mix of Live-Evil in some ways puts listeners right up on the stage with the musicians. Not only will you hear the room space around the guitar as McLaughlin tares through his solos heard from the back left channel on the fourth track “What I Say,” but the pure ambience surrounding DeJohnette’s drums become very evident on his extended solo. The kit seemingly spreads around all four channels, with a strong focus on the right side, which includes the kick drum beating from the back right channel.

As I hinted above about the live material, the performances are immediate and fiery, played with great enthusiasm. The studio sessions are an entirely different flavor, parts of which lead deeply into the avant-garde. Certainly, Davis is featured even more on these three tracks that have a tighter and more refined sound quality compared to the live disc. While there is still plenty of cross pollination among the instruments, it seems there is also some isolation that realistically isn’t possible during a live performance. Thus, I find the quad mix of the studio session disc to have greater separation and almost a complete removal of the splashy blurring heard on the live disc. The free direction creates an awesome recording, amidst its improvisational flaws that grooves amazingly well nearly a half decade later.

I would be remiss in not mentioning the importance of having four full range speakers, preferably identical, when experiencing the Live-Evil quad mix. With the bass pushed toward the rears, a full range speaker that is common in the front channels becomes critical for the best enjoyment of this and many other quad and surround mixes that dig deep into the lower frequencies across all of the channels.

Now, for those readers who remain in the stereo camp, each SACD contains a 2.0 stereo DSD layer that sounds very good overall. I missed some of the deep lows heard on the quad mix, but felt the upper frequencies were not as saturated, leading to a clearer top end. I may even find the audience position with the stereoscape across the front channels to be more appealing for the live disc, yet I missed the depth and rather enjoy being surrounded by the band. Likewise, the difference in mixing and mastering lead to an entirely different balance among the instruments, such as more prominence given to the cymbals.

Regardless of your choice for the DSD layer, I wager that this edition is the best sounding to date. I strongly recommend picking up Live-Evil if the music is up your alley. Collectors of quad will certainly want this for the absorbing mixes and frankly I think that this is a must have for any fan of fusion-jazz and Mile Davis for that matter.