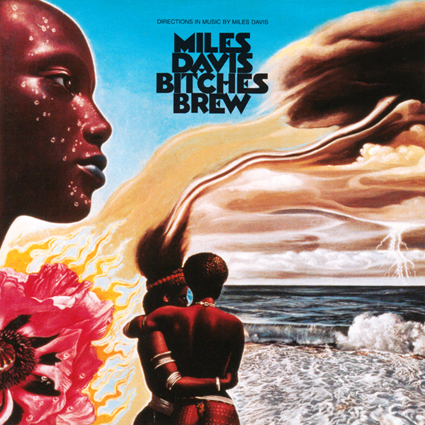 When Miles Davis dared to abruptly change his musical direction upon the release of Bitches Brew in early 1970, he took an absolute left-turn paring melody back to the minimum, and laying down the sketchiest of themes, all while abandoning a conventional musical structure. For some it still remains a difficult listen, which is why it may come as a surprise that Bitches Brew became Davis’s first gold album. Likewise, it received a well regarded quad mix that has been out of print on quad vinyl since its 1971 release, and now has finally been reissued as a quad SACD by Sony Japan.

Miles had set his eyes on a younger audience, successfully migrating from jazz clubs into rock venues such as the Fillmore East in New York and rock festivals such as the Isle of Wight. Fans of Jimi Hendrix and the Grateful Dead found the trippy spaced-out jams that extend across the double length album ideally suited to their psychedelic ways.

Previously Bitches Brew has been reissued as two different definitive editions, a 3-CD “complete” edition in 2003 and a 4-CD 40th anniversary set in 2010. The SACD reviewed here merely covers the original recordings that were mixed into quad, thus fans won’t find any extras on this Sony Japan import.

When the 4-channel quadraphonic system was originally marketed back in the day, CBS and Sony jumped into the forefront with their SQ matrix system and Bitches Brew became one of the first quad albums to be issued on that label. With some heavy remixing, listeners will hear Harvey Brooks’ bass predominantly up front in the center, while also mixed out to the rear channels. With drums focused in the front right channel along with accents popping up in the left rears. Miles’ trumpet and John McLaughlin’s guitar pan back and forth around the quadscape, along with keyboards typically accenting from the front left channel. Naturally the sound has become way more open with the use of the back channels, allowing for a crisper and significantly reduced density compared to the stereo mix. Freaky echo effects shoot off to alternating back channels at irregular intervals exaggerating what is considered somewhat of a close-miked session, but contrasts the original smoky moist club ambience of the stereo mix which blares at a high volume into a pair of overloaded microphones. The more direct and greater openness of the quad version is fresh and inviting without causing listener fatigue. Until now the quad vinyl edition noted above has remained something of an elusive collector’s item, and given the limited run of the quad SACD’s, you’ll want to read on to find out why this is a must have edition.

An associate had loaned a hi-res digital transfer of the quad LP to me prior to this SACD release, allowing me to provide a comparison. The quad SACD has cleaned up much of the distortion and brightness heard on the vinyl transfer, while also maintaining excellent balance across the four channels. There is a wonderful warmth heard on the SACD that evokes a real analog feel while losing the higher noise floor of the vinyl transfer. Overall I feel the SACD has a moderate level of transparency, expect to hear some tape and electronics noise, which is indicative of the era. Thankfully this doesn’t distract from the musicality of these sessions which are some of the liveliest I have heard to date.

From an immersionist perspective, Bitches Brew ranks at the top, with fantastic use of all four channels, along with plenty of ear candy for quadroholics. In true 70’s fashion, parts float around the room and Davis’s trumpet blasts across the entire soundstage with delayed echoes reverberating across the back channels. I happen to be a fan of this mixing style, and find it lends to the musical interplay of these extemporaneous sessions.

But for stereoholics, a second DSD layer has been imprinted on these hybrid SACD’s which yield the original 1970 stereo mix taken from most recent mastering. My preference remains with the quad version, which absolutely opens up these recordings and nearly place the listener into the center of the studio with the musicians circled all around.

Packaging is outstanding and housed in a 7” x 7” vinyl replica fold out that includes the shiny silver artwork. There is plenty of little extras included with this 2 SACD set, such as a sticker and booklet with photos and commentary. Some collectors may bulk at the price, yet this limited edition is comparably priced to other single SACD discs release by Sony Japan, making this somewhat of a bargain from my perspective.

Bitches Brew is one of the most engaging quad aural experiences I have had the pleasure to enjoy. This is an absolute must have for quad and surround collectors, hi-res stereo enthusiasts, and fans of Miles Davis, along with listeners who enjoy jazz-fusion. I hear something new every time I sit down for another listen, this is an album worth listening to over and over again.

Fanatics note: Pharoah’s Dance on the SQ Quad is 30 seconds shorter than on the stereo copy, although the label states 20:00, the actual recording lasts exactly 19:30.