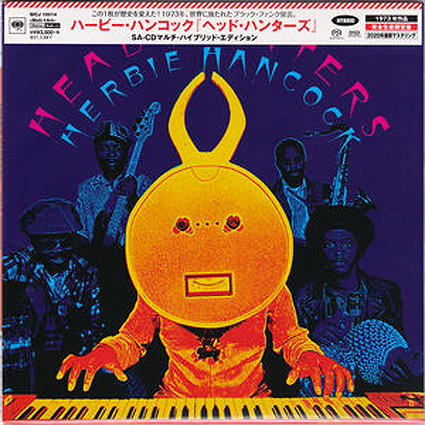 Sony Japan continues with their limited edition quad SACD series with one of the greatest masterpieces of the fusion jazz genre. The 1973 “Head Hunters” album from keyboardist Herbie Hancock gets a reissue in multi-channel surround and now housed in a 7” cardboard sleeve case. Not only is the packaging unique to other editions, for the first time, the actual 4 channel quad version of the album has been released in a digital format. This should not be confused with the SACD that was issued by Sony Japan back in 2008, a 5.1 version which was reconfigured from the four channel master tapes. Instead this newly remastered 2020 edition truly gives quadrophonic collectors the original mix on a great format, and directly takes fans back to the 70’s quad era.

After recording with Miles Davis over several years starting in 1963, Hancock's solo career blossomed on the Blue Note label with his classic albums Maiden Voyage, Empyrean Isles, and Speak Like a Child. After leaving Miles Davis's group, Hancock put together a new band called The Headhunters and, in 1973, recorded Head Hunters. This album became a pivotal point in his career, bringing him into the limelight of fusion jazz. Drawing heavily from Sly Stone, Curtis Mayfield and James Brown, Hancock developed a deep funky, texturally gritty rhythms over which he took liberties with electric synthesizer solos. Maintaining all of the sensibilities of jazz, particularly with his long improvisational solos, he firmly tied jazz to the rhythms of funk, soul, and R&B, in turn giving the album a mass appeal.