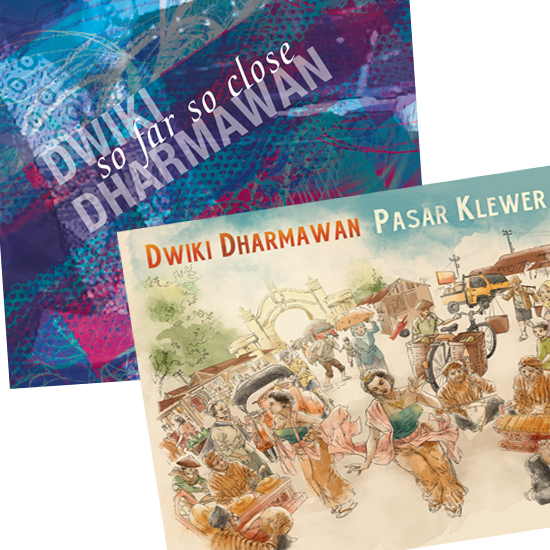 From his earliest recordings, Dwiki Dharmawan has pursued a variety of musical traditions of his Indonesian homeland, originally starting with the exploration of Sundanese, then later exploring the sounds of Aceh, Java, Bali, and Eastern Indonesia. During his multi-decade career he has travelled to over sixty countries performing his unique blend of world fusion jazz and has recently joined the Moonjune Records family of artists, releasing two high resolution stereo albums over the past year.

Dharmawan's 2015 release “So Far, So Close” was his powerful pan-cultural, debut on MoonJune, featuring progressive-rock and fusion-jazz luminaries, Chad Wackerman, Jimmy Haslip, and the legendary violinist, Jerry Goodman. The album is chalk full of adventurous pieces which revive the “golden era" of 70’s fusion, as Dharmawan and company continue to press hard on the pedal while traversing to elevated sonic levels in effortless fashion. Recorded in Los Angeles by Jeff Lorber and mixed and mastered by the renowned producer, Robert Feist, the sound quality is simply stellar from the first to the last note.

This slickly produced release has L.A. written all over it, from Wackerman’s snappy kick drum to Haslip’s smooth and solid bass, listeners can easily hear the west coast vibe embedded in the aural scape. Dharmawan's keyboard parts shimmer and cut through the mix with vibrant clarity, while the guitar work played by his compadres Dewa Budjana and Tohpati sparkle and sizzle on their respective tracks. Truly a high energy release that leaves little time to show off dynamics, but plenty of opportunity to experience a wide and vibrant stereo soundstage.

Steering down a different path for his 2016 release “Pasar Klewer,” Dharmawan tried something different which he says is his answer to the modern crises and urban uprooting. Recorded at London’s EastCote Studio, this two-disc album cross pollinates the cream of Britain's younger expat crop with Indonesian musicians to create a tightly blended mix of acoustic piano driven world-jazz. Pasar Klewer’s distinctive sound is derived from an ancient Gamelan tonal system called Salendro, while also adapting other musical elements from all over the Indonesian archipelago, as well as the western diatonic system.

A very different emotion is heard compared to his previous album, with Pasar Klewar taking on a open and airy feeling. The 24-bit / 88.2kHz FLAC absolutely allows this album to shine with remarkable depth and tonal quality. An aspact that is immediately apparent in the mix is how natural sounding every part is, with plenty of space surrounding each element. The drums are subtle and pure rising and falling as called for by the dynamics, with each touch of the cymbal crisply heard, and hit of the snare and toms extremely distinct. The title track opens the album with its exhilarating modal nature, affording the pianist and his band the freedom of exploration. Dharmawan’s piano is majestically vast, while guitarist Mark Wingfield’s overdriven electric guitar richly soars through his tasteful solo. For me the second song “Spirit Of Peace” is absolutely my favorite, with the sharp gamalan and kendang percussion invigorating the mesmerizing melody. Gilad Atzmon’s enchanting clarinet is warmly present with each breath transparently laid over an otherwise utterly silent room. The large round upright bass played by Yaron Stavi fills out this magnificent album recorded by Phil Bagenal and mixed by Mark Wingfield.

There is an overall freedom which may surprise listeners as the album progresses. The liberating interaction among the band members diverges and joins back together as an explosion of energy pushing the dynamics to its peaks without an ounce of distortion and a wonderful clarity of feeling like you are in the presence of the live band.

Simply put, both of his recent album on Moonjune are sonically excellent, and fans will receive a complimentary download code for the high resolution files when ordering either the CD or vinyl versions through his BandCamp page. If you haven’t yet added Dwiki Dharmawan to your collection, this is your chance, especially when you’ll get a lossless stereo 24/88.2 hi-res download to boot, you won’t be sorry with either of these two records. When Dwiki Dharmawan is soon on the lips of jazz fans around the world you’ll know that you helped him get there

Available on Vinyl or CD with complimentary 24/88.2 stereo hi-res download in WAVE, FLAC, or ALAC.