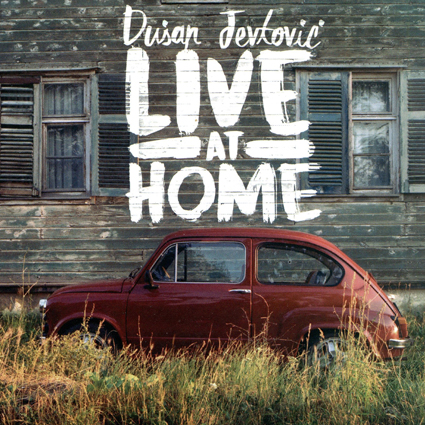 When I see projects like Dusan Jevtovic’s “Live at Home” which fully intend to use the proceeds for their next release, I immediately know that the creative side has not been tampered by commercial motives. Even with its limited CD run of 200 copies, this speaks volumes to sharing finely crafted music for the sake of the music. Available through Moonjune Records Bandcamp page this daringly creative live album was recorded in December 2016 at the Decije Pozorište in Dusan’s home city of Kragujevac in Serbia.

Containing a number of pieces from his “No Answer” album released in June 2017, renowned Serbian keyboardist, Vasil Hadzimanov, has once again joined guitarist Dusan Jevtovic. The remainder of the band for the live recoriodng include Pera Krstajic on bass and Pedja Milutonovic on drums.

Fusion comes in many forms, and Jevtovic easily moves among these from the opening haunting guitar and keyboards to an onslaught of extemporaneous interplay. Live at Home goes far beyond sterile formulaic grooves, instead teeming with deep emotionality painted by a creative tapestry whereby human touch burns energetically.

There are surprising moments on this seven track album such as the sensitive vocals on the second song “Angel Al Aire.” I found the recording to be very clear and open, with audience noise limited to the breaks. As a juxtaposition to the second part of track two “Soko Bira” extends into the abyss of boldly wild improvisation that pushes outside the bounds of fusion somewhere into the realm of avant-garde.

Although this is a standard resolution recording, it absolutely sounds great with an excellent balance that spreads across the spectrum. Lows are rich, mids are warm and highs tingle at the top. The soundstage is centrally focused, which works well for a live quartet, as there is plenty of room for each instrument to breathe their own voice in consort with the balance of the band.

Straight out rockers are likely to take fancy to “New Pop” which evenly meters a set of changes over which ruckus solos liberally take hold. There is a pleasant live space that spreads across the soundstage with drums distinctly pattering out the rhythms.

While I am a fusion fan first, progressive rock is my personal second favorite genre. Jevtovic takes us into an adventurous piece titled “Babe” that leans heavily on both of these genres highlighting his strength as a composer. He has most successfully merged sampled voices of Serbian folk singers with complex rhythms and heavy discordant passages showcasing his heritage.
Live at Home has been spiced with a flavorful plate served by musicians who clearly have created a great connection with each other. Their delivery demonstrates the strength of the compositions, taking the basic components of fusion into the world of improvisation.

Strongly recommended for those who enjoy edgy tunes spiked by unpredictability performed by accomplished players. This album rewards through intensive listens, wherein each pass new discoveries are waiting.

Limited Edition Compact Disc or as a Lossless 44.1/16 Download through his Bandcamp page.