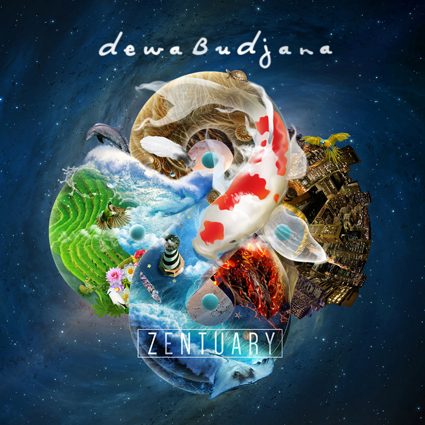 Offering a cross-cultural blend of songs which excite, engage, and enthrall listeners, Budjana continues to elevate the level of his game on his fifth solo album. His guitar chops easily rival veteran players such as John McLaughlin, Alan Holdsworth, Pat Metheny and the like, making him one of the genre's most accomplished composers and arrangers. The music found on this release is a synergistic mixture of brilliant instrumental progressive rock, jazz-rock fusion and world music.

Zentuary is available on both CD (released worldwide on Steve Vai's Favored Nations label, except in Indonesia where is released on deMajors/MoonJune Asia) and Vinyl (3LP 180 grams gatefold which comes with HD Downlaod available in FLAC/WAV/ALAC), however reviewed here is the high resolution 24bit / 96kHz stereo FLAC files that fans can have with the purchase of the 2CD or 3LP version, or download from the Indonesian Dewa Budjana's BandCamp page.

Primarily recorded over a couple of days at Dreamland Recording Studio, West Hurley / Woodstock, NY by Matthew Cullen, listeners are treated to an expressive spatial experience that brings the band directly into their entertainment room.

This is an extremely open and lucid high resolution mix that provides plenty of dynamics. I especially enjoy hearing the sticks crisply hit the cymbals and the space that surrounds them, along with the striking snap and ring of the snare drum plus the thud of the kick. While the drums have been given a push in the mix, driving the energy closer to the side of rock, Levin’s bass and stick work completely fill out the bottom. Remind yourself that this is a 2.0 mix, yet the vigorous bass is smooth and rich while reaching down to the deepest notes without the use of any sub-woofers.

The melody of the third track “Lake Takengon” is one of the most interesting I have heard to date, with Budjana’s electric guitar delayed slightly across the front channels. A few tonal variations are easily heard, all with the vibrancy audio enthusiasts would expect from a top notch recording. The quality of the guitars, including the acoustic rhythm show no signs of being boxed in, with plenty of space to breathe. Vocals effortlessly compliment this track with a real immediacy which adds to the songs tapestry.

The tune “Pancaroba” will get you lost in various time signatures as Budjana rifles through another intense melody. Guitars, vocal effects and keyboards are spread widely across the soundstage, blending perfectly as they share the common theme. Guitars are bright, but by no means thin nor edgy, with chord hits adding a heavy progressive element as the song builds. Tim Garland’s tenor sax solo shines on the next track “Manhattan Temple,” where it is so easy to hear every expression from the peaks to the valley, as if the band is right in the listening room.

The overall mix is very dimensional, with parts jumping out in front and falling behind the speakers. This continues to be evident on “Ujung Galuh” another driving fusion piece with several incredible solos. Danny Markovich’s curved soprano sax takes center stage here, and once again the remarkable sound quality gives plenty of room to clearly hear every nuance.

You’ll likely be just as surprised when the album is over, and then wish for more. Even after over 100 minutes of fantastic music that excites any avid fusion fan, it simply ends too suddenly. For high-resolution audio enthusiasts the FLAC download comes complimentary with the purchase of Double CD (Favored Nations) or 3 LP (Audio Anatomy). No question about it, this is a must have. Still not convinced? Preview it first, believe me I am certain you’ll want to include this in your collection!

When you’re ready for more, his other albums are: