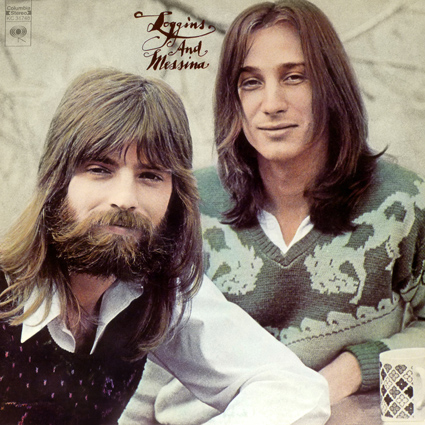 It was Loggins & Messina’s self-titled debut album that was most representative of their impact on country and pop music in the early 70’s. They knocked down the walls with their collaboration on the hit single "Your Mama Don't Dance," along with "Good Friend" and the extended "Angry Eyes." Now available from Audio Fidelity as a Hybrid SACD featuring both Quad and Stereo transfers, all anchored by their backup band featuring multi-instrumentalist Al Garth, keyboardist Michael Omartian and Poco steel guitarist Rusty Young.

After pulling Larry Keyes quad remix off the shelves, Audio Fidelity brought in Gus Skinas of High Definition DSD Transfer to bring the analog tapes into the digital domain. Steve Hoffman once again handled the mastering of the SACD, and now high resolution audio enthusiasts have two audiophile versions to choose from.

Naturally it is the quad mix that is of greater interest to me, and I am generally pleased with this release. Yes, it is not an ordinary later day mix, as the opening track “Good Friend” places the drums in the back right and bass and secondary guitar in the back left channels. Vocals are centered up front with keyboards to the left and guitars at the right. In fact this is very much like hanging in the studio as the band plays. But, it is not the current convention of todays multi-channel mixers, rather the experimental days of quad.

While the main vocals stay rooted up front, Keyes has creatively placed the remaining instruments in various positions from song to song, such as spreading the drums across the rears while tossing the various guitars, slide, fiddle and keyboards to the far corners of the soundstage on “Long Tail Cat.” While the overall balance is very good, I sadly felt a lack of clarity with a muddiness to the bass sound and a flat snare and flabby kick. It seems like a light haze covered the entire recording, but I must assume this all comes from the quad master, and I am certain we have the best sounding version on hand.

The stereo DSD is fantastic, and feels more alive to me. In fact, there are critical differences between the stereo and quad mixes that may cause long time fans of Loggins and Messina to reject the quad mix outright. This is most noticeable on their hit “Your Mama Don't Dance” which lacks the punch of the snare and hi-hat when listening to the quad version, but distinctly drives the song on the stereo layer.

All in all it is the closing track “Angry Eyes” that truly takes it home for me. Returning to a similar instrument placement heard at the start of the album, drums are spread from the back right up to the front left, and bass once again takes the rear left. Vocals are anchored in the front channels, with the main guitar in the front right. The album version features an extended solo section that takes on a fusion and prog rock feel with fantastic solos the are featured in the various corners of the room, giving each soloist ample space within the mix. Hands down, I consider this song to be their best and I simply love the quad mix.

Putting aside my complaints, I am delighted to add this into my surround sound collection. I can only wonder what would happen if a brand new 5.1 mix was made. But, until then this is the best version to own and demonstrates a creative use of the quad soundstage. Fans of Loggins & Messina would be remiss in skipping this, thus get your copy before it goes out of print.