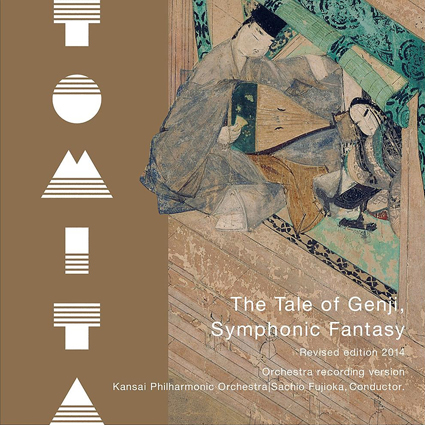 The final edition of "Genji Monogatari Illusion" (aka The Tale of Genji: Symphonic Fantasy) by Isao Tomita was recently released in the Japanese market. Originally released in November 2000, "Genji Monogatari Illusion Symphony" has been revisited and evolved many times by Isao Tomita. The legendary live performance on this Blu-ray with Sachio Fujioka and the Kansai Philharmonic Orchestra at Izumi Hall in Osaka was recorded on April 3, 2015, using the latest technology, in high-resolution format 3D audio.

This album is a work that represents Japan in the 21st century not only by combining orchestral formation and traditional Japanese musical instruments, but also by collaborating with Tomita's own music, with overwhelming spatial effect. During his esteemed career, themes from TV have included NHK's "Life of Flowers," "Heaven and Earth," "Shinpeike Monogatari," "Katsukaishu," "Ieyasu Tokugawa," "New Japan Travelogue," "Modern Images," "Kaikyo," as well as in anime films such as "A Fugitive from the Hunger," "Prophecies of Nostradamus," and "The Story of the Police Agency."

From the 1960s to the 1970s, Tomita was one of the first to start working on 3D sound works. As a representative work, he composed music for the Toshiba IHI pavilion at the 1970 Osaka Expo, and in 1984, super stereophonic sound using the ground, river surface, and sky on both banks of the Donau River in Austria. He also held a magnificent event "Tomita SoundCloud" that enveloped an audience of 80,000 in the sound universe, which was a great success. Since then, similar events have been held in New York (1986 Statue of Liberty 100th Anniversary), Gifu (1988 Chubu Mirai Expo), Sydney (1988 Australia 200th Anniversary Festival), and Nagoya (1997 Chunichi Dome).

This release is based on HIS 1998 original composition "Genji Monogatari Illusion Symphony Picture Scroll," which has been called the culmination of Tomita’s music. It is said that he was creating new works until just before he died in May of 2016.