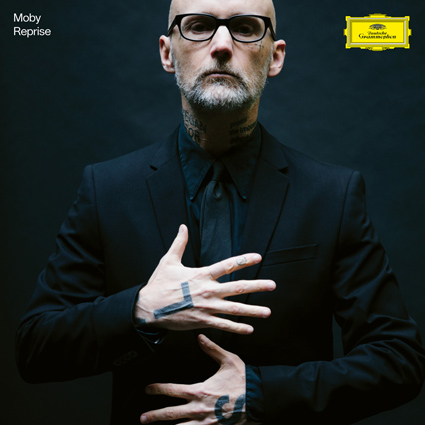 Over the past 30 years Moby has been best known as an electronic music icon. Yet, his eclectic career has led him down the path as a singer/songwriter, producer, activist, and even a restaurateur. On his 2021 Deutsche Grammophon album titled “Reprise” he explores the world of classical, featuring tracks including “Go,” “Porcelain,” “Extreme Ways,” and “Natural Blues.” All of these songs and more have been reimagined as stunning new orchestral and acoustic arrangements.

Moby has collaborated with a stellar lineup of musicians from across the spectrum taking a direct cue from his October 2018 performance alongside the LA Phil with conductor and friend, Gustavo Dudamel. That earlier performance was the inspiration for the current project, which features not only full orchestral versions but new electronic arrangements, as well as sophisticated smaller-scale acoustic interpretations. The 14-track album includes musical guest Jim James (My Morning Jacket) on "Porcelain"; Gregory Porter and Amythyst Kiah on "Natural Blues"; and Kris Kristofferson with original vocalist Mark Lanegan on "The Lonely Night". Plus, the Blu-ray also features a cover of David Bowie's classic song “Heroes.”

While this ambient mix makes subtle yet distinct use of the back and height channels, one may find their immersive experience to be very different based on one’s room and volume level. The opening track “Everlong” starts with acoustic guitars and humming from the front left channel followed by a piano joining in from the front right, with the snare rim clicking from the center, and spreading to the synth in the back left, then delaying into the back right.

Since I don’t yet have an Atmos system, I have streamed this as a downmixed 5.1 through Apple Music while I wait for my physical copy to arrive. The second track “Natural Blues” leans into a techno rock beat with the background vocals emanating from the rears, which apparently have been elevated on the Atmos mix. Synth melodies playfully roll around the room, yet this feels more front focused, which may require one to really open their ears to feel surrounded.

Digging deeper into the techno realm, “Go” is a beat driven piece with shakers in the back and electronic rhythmic grooves spreading across the front. I really like how the synthesizers swell dynamically from the rear and ominously build into a percussion break in the center speaker. Atmos listeners have noted they hear Moby’s vocals near the end of “Extreme Ways” rise to the ceiling speakers. Plus, on the track “Lift Me Up,” the background chanting vocals at the end have been placed in the upper speakers.

The rendition of the song “Lonely Night” heard on Reprise reminds me of many of Leonard Cohen’s vocals. However, it features guest vocalist Kris Kristofferson reciting the lyrics in a weather beaten husky voice falling in the center channel with acoustic guitars and synths spread nicely across the front speakers that aid to isolate the voice. With a peaceful tone a smooth ambience and light strings swelling into the back channels, the drums gently pick it up with bass kicking in up front.

I rather like the cover version of Bowie’s “Heroes” even if the beginning is mostly focused in the front speakers. But, as mentioned already, it is the subtleties that reign supreme and this song progresses nicely, washing up into the back channels like a wave upon a shore. Overall, throughout the album the sound is lush, with good separation and creeping dynamics that once again demonstrate why high resolution music listening is preferred to lower quality bit depths. The instrumentation is pristine with an engaging rough counterbalance of the vocals. When I first read about the album, I expected a more classical influenced release, especially given the label. However, this is still strongly rooted in the rock and electronic world, making for a fantastic, dare I call it ‘cross over,’ rehash of many of his songs!

Reprise is recommended for fans of Moby and certainly a worthy addition to any multi-channel enthusiasts’ collection. Those seeking a chill out disc and wanting to explore alternate versions of previously recorded material should find this album to be very intriguing.