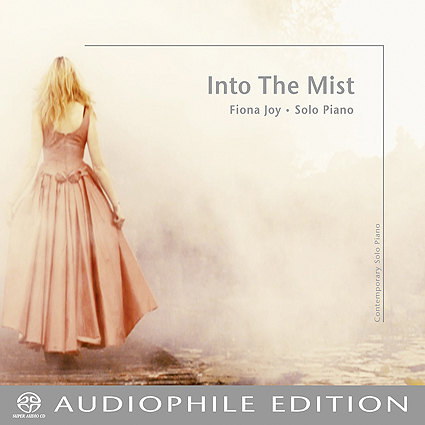 It is hard to imagine that the path of least resistance is typically the most rewarding, and put in audio terms the least processed music often sounds the best. Yet this is precisely what listeners will experience when hearing Fiona Joy’s latest release "Into the Mist" which has been superbly recorded by producer and engineer Cookie Marenco. Utilizing the high-fidelity format called Direct Stream Digital (DSD), Marenco has employed her proprietary technique called Extended Sound Environment (E.S.E.) by which she has directly recorded each unedited take to Quad DSD256.

Into the Mist is the second album to be released on Blue Coast Records, and we’ll explore the previous album "Signature - Solo" here too. I received both as Hybrid SACD’s which contain a CD layer and of course a SACD stereo DSD layer which is what I’ll write about here. These are both solo piano releases, performed on a seven foot 1885 Steinway grand piano. Much of the secret sauce to the sound quality can be attributed to both microphone selection and placement, but surely the signal path and ESE proprietary process adds the magic that defines these incredible audiophile recordings.

I was first introduced to Fiona Joy Hawkins when she released “Blue Dream” back in 2009 and subsequently her 2013 album titled “600 Years in a Moment” both produced by Windham Hill Records founder William Ackerman. It is no wonder how she came to work with Blue Coast Records as founder Marenco had been part of the production team at Windham Hill back in the 80’s. Continuing the neo-classical genre, also known by some as New Age, Fiona Joy has written ten delightful pieces for her 2017 release Into the Mist.

Unlike many of the discs I have, there is plenty of headroom, allowing me to push the amp further without the possibility of maxing out at the top of the dynamic range. I think we can safely say that an acoustic grand piano will not hit the peak of 120db, the technical dynamic range of an SACD. Of course as you know it is the sum of all of the parts, which include the levels set at the time of recording, plus any adjustments made during mixdown and mastering. I found a level that approximated what I felt an actual live piano in my listening room would sound like based on my previous experiences as an audio engineer, and sat down for a listening session.

The piano spreads across the stereo channels, staying comfortably within the limits of the image, not being narrow, but not being excessively wide either. The lower octaves are weighted toward the left channel, while the upper octaves are weighted towards the right. For recording novices, the acoustic piano is one of the most difficult instruments to successfully capture, as it often yields imbalances across the range due to microphone placement which cause phasing problems and issues related to microphone sensitivity. You won’t hear that when listening to all of the tracks on Into the Mist. Instead I literally felt as though Fiona Joy had brought her Steinway and incredible talents right into my home and provided a personal performance for me.

Do I need to even mention how transparent, open and well defined these pieces sound? The top range glistens while the mids and lows warmly draw out the picturesque movement of these emotional songs. Fans of George Winston should instantly love the music of Fiona Joy, which by no means is a direct copy of his talents. Rather Joy’s music goes into a new dimension which is akin to classical and evidenced by the three part Opus which starts with the album theme.

I sense the piano is turned slightly allowing me to see across the keyboard and feel the depth especially as the harmonics shimmer after each note is struck. I can’t say enough about the immediacy to the top end as Joy elevates to the upper octaves. The brilliance of the keys strikes so perfectly and with such clarity it is difficult to admit that she is not right in front of me. I don’t think I have ever said this, but there is absolutely nothing I would change about this recording, meaning it is perfect from my perspective. This is a five star release, and deserves every accolade for sound quality, performance, and composition. Musically it is her most accomplished work, guiding you across landscapes and interweaved with emotions. There are delicate moments and playful sections as she cascades across the keyboard. Pieces flow and ripple with a modern voice that gives classical music a new touch.

Joy’s first release on Blue Coast Records in 2015 titled "Signature - Solo" also contains ten solo piano recordings. However, this album was recorded to analog tape, and Marenco used the ESE process to mix direct to stereo DSD, which yields a different aural quality. The overall stereo image is wider and there is a distinct use of room ambience layered into the mix which places the piano in a much larger space. This doesn’t detract from the overall enjoyment of Signature, but it feels a little less intimate. I have now been transported to a hall where she is performing these uplifting pieces, and it is easy to close my eyes and envision her on a stage. The upper range is angelic and I feel a greater roundness to the low end. Unlike her latest release, the piano appears flat across the speakers, minimizing the depth. An occasionally characteristic aspect to Joy’s pieces are her vocal additions that soar among the duet “Once Upon Impossible” featuring guitarist Lawrence Blatt.

Blue Coast Records has done an excellent job at making various formats available to satisfy every listener, including CD’s, SACD’s, DSD, FLAC or WAVE downloads in various resolutions. Yet it is their continued push forward through the use of new recording technologies which makes them a pioneer and role model for other audiophile releases.

A must have for fans of Fiona Joy, listeners who enjoy engaging with elegant acoustic music, and purists that seek the best audiophile recordings in the world. I advise opting for the highest quality DSD download your system can handle before considering the SACD or PCM file formats. Regardless of the format you select, it will be an amazing listen, as these are by far the highest quality releases recorded with the best quality equipment known to human kind.