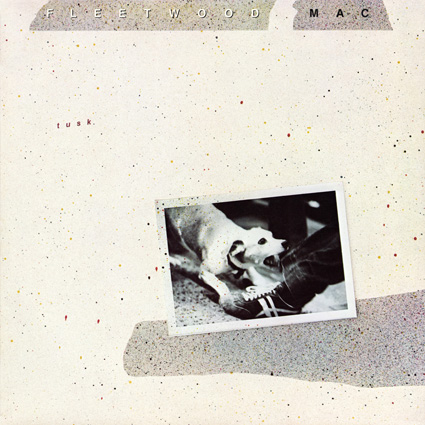 Born in the aftermath of their wildly successful album Rumours, Fleetwood Mac was given a blank check for its next album Tusk. Even though they had already fallen apart, the separation between band members resulted in a sprawling, unconnected, and utterly brilliant 20-track double album. A flop at the time of it’s release, the album fell far short of its predecessor yielding only two top 10 hit singles,

So why take what was initially a flop and create a five CDs box set that contains a newly mixed surround sound version on DVD-Audio along with two LP’s? Is the label still trying to recoup that blank check? While Tusk may not be as universal or immediate as Rumours, it is peerless and weirdly classic like a piece of pop art. This deluxe edition set aside for fans with deep pockets will get the new mix plust the remastered original album, along with an alternate version of the complete album which includes session outtakes, many of which have never been released, as well as an additional selection of singles and demos. Also included are two discs loaded with 22 unreleased performances from the band's 1979 Tusk tour with selections from concerts in London, Tucson, and St. Louis. Of greatest interest to Hi-Res Music enthusiasts is the 5.1 surround mix of Tusk on DVD-Audio plus vinyl of the original album on 2-LP’s.

It becomes immediately apparent that this is a brilliant, well thought out surround mix, which extends beyond convention by artistically placing various parts across the sound stage based on where they would best fit track to track. Mixing engineer Ken Caillat has done a superlative job of opening up the sound stage allowing for the discrete placement of parts to provide an amazing aural experience.

The opening track “Over & Over” lightly ads second guitars in the rear channels, with the smooth bass and steady drums up front. Naturally the main vocals are also in the front, but they are spread across all three channels and dipped in a lush reverberant space. Check out the harmony vocals as the song develops, placed in all corners as they sing “Over and Over,” found on this rich DTS 24-bit / 96kHz surround version.

Don’t except a continuous immersive experience throughout Tusk, rather the genius of the 5.1 mixes comes from the spaces in between as is evident on the third track “Think About Me,” which makes light use of the back channels until the guitar solo takes hold in the middle of the song.

Yet, even on the relaxing Stevie Nicks song “Storms” those sitting in the sweet spot will be surrounded by vocal harmonies and gentle instrumentation. Two guitars play against each other from the left and right front channels with lovely dynamic peaks that accent their parts, moving the listeners attention between them as they percolate. Keyboards fall in the right rear speaker with alternate guitar work placed in the rear left speaker.

Those of us who have listened to Fleetwood Mac over the decades know just how well their albums were recorded. Tusk may be their absolute best, especially given the amount of attention paid to the recording process. Each part is solid and crystal clear, plus very warm and tonally balanced. Every young sound engineer and rising star would be best advised to pay attention to these kinds of details, as it is more than the music that makes up a release. While there are plenty of other top shelf recordings, Tusk is certainly one of the best of all time.

As the album plays on, “Brown Eyes” is a magnificent immersive aural experience that yields a deep sound scape, filling every nook and cranny. There is a real satisfying energy that emanates from all four corners while the harmonies once again are spread around the room.

We finally reach the title track just before the end of this 20 song album, and it is the Magnum Opus by Lindsey Buckingham. Street noise fades in across the front channels expanding to the back channels as the drums follow with the catchy rhythm that hits across all the front channels. The song builds, continuing to push the dynamics while completely surrounding the listener. An absolutely crafty piece that works amazingly well in surround.

Some quick notes about the vinyl included in this massive box set. For lovers of LP’s, these are some of the cleanest vinyl records I have ever heard with an exceptionally low noise floor. The sound is smooth and resilient across the spectrum with a very pleasant warmth common to the vinyl realm. While I will stick to the surround version, I can easily see the appeal of enjoying this album on high quality vinyl. And just to keep them extra secure, they are placed in a heavy weight double sleeve and slid into the gatefold ridged cover.

Now, on the other hand if you aren’t equipped for surround, or for whatever reason prefer the stereo mix, I certainly suggest comparing the LPCM two channel high resolution version found on the DVD-A against the vinyl version. There is a distinct difference in coloration across the spectrum, most notably with a punch in the high end on the DVD, and a slight diminishing mid-range warmth. I absolutely prefer the vinyl version, and am somewhat surprised the match is not closer between the two versions. However, the DVD-A has a level of transparency that is subtly masked by the noise floor of the vinyl. And thus, as with most critical listening, the sound is in your ears.

Fans, like myself, really wished Tusk had been offered as a stand alone DVD-A containing both the stereo and multi-channel mixes. This super deluxe box set is very much out of the reach for many collectors, although it is worthy in its own right. After much searching I found copies for about $90 US with shipping, which is still not affordable for many collectors. While I definitely recommend this release, obviously it is best suited for the hard core fan and surround sound completest. You will be delighted with the sound quality, 5.1 mix, and packaging, it is a five-star production.