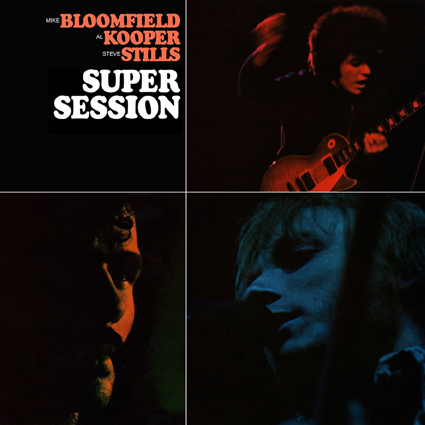 Three legends of rock music came together for this critically acclaimed release "Super Session." Back in the day Al Kooper, Paul Butterfield and Steven Stills were revered by blues fans, effectively cementing the title of their collaborative release. This is an incredible recording that has been released in 5.1 surround sound for the first time, and is produced by Al Kooper. Mastering for the surround sound mix is done by Bob Ludwig at Gateway Mastering Studios, while Steve Hoffman handled the original 2-track stereo and DSD mastering at Marsh Mastering studios.

Don't let anyone tell you that the SACD format is dead, this is yet another great release on what I consider to be the best audio format. In fact Kooper has done an excellent job at remixing this classic album. Don't' expect the hard panning of guitars and drums to the left and right, as found on the original stereo mix. Instead, this mix is a reinterpretation where guitars have been centered, appearing from the front center channel, and falling across the left and right fronts with some light reflections from the rear. Likewise drums have been centered and the organ literally comes from all four directions, sometimes feeling rooted in the rear channels, while others pushing from the front to the back. Somewhat freaky is the addition of count ins, scratching noises, and the like prior to the start of some of the tracks. For purists, this will certainly be a distraction, as these extraneous segments were left on the cutting floor when producing the original album. Rightly so, I don't think they really add anything.

Listeners will find the aural quality of the surround mix is vastly different from the thin mid-range centric original stereo mix. Both are found on the SACD, with the original stereo mix effectively a transfer of the original masters. The new surround mix is heavily weighted to the low end, creating an extremely full mix. The kick drum is distinct, and the bass guitar grumbles with a slight buzz across the front channels. I find it somewhat overbearing, yet this heaviness compliments the blues and truly brings an otherwise thin recording to life. It is the "Season of the Witch" that takes the cake, listen for yourself! I have a sense that these guys are playing in my listening room, a sensation I never experienced before with this album.

This is a must have for blues fans, but only best for dye hard surround enthusiasts. Very good, and enjoyable.