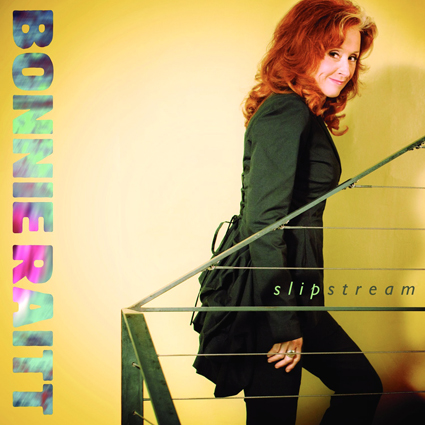 Blues fans won't want to miss Bonnie Raitt's new album Slipstream which is steeped with the inimitable slide guitar and soulful vocals that could only be hers. Her first new album in seven years, and released on her newly minted label, Redwing Records. While most of Slipstream is self-produced and features Raitt's longtime touring band, four of the album s songs were helmed by celebrated producer Joe Henry and showcase his usual crew of extraordinary musicians. Hi-fi enthusiasts will want to pick up the vinyl edition.

We have noticed that veteran roots artists have recently been releasing some of the best music of their careers, such as Gregg Allman, Dr, John, B.B. King, and now Bonnie Raitt. Joining her on ten songs recorded at Henry's home studio are guitarist Greg Leisz and pianist Patrick Warren along with the rhythm section of bassist David Piltch and Jay Bellrose. Four of the songs have been released on "Slipstream"- Bob Dylan's "Standing In the Doorway" and "Million Miles" are standouts, while Loudon Wainwright III's "You Can't Fail Me Know" and Henry's "God Only Knows" are ballads that will stay in your head long after your first listen. Note: Bonnie plans on releasing the remaining Henry produced songs from this session at a later date.

Raitt has self-produced the other eight tracks on the album featuring her band of many years which includes: George Marinelli on guitar, "Hutch" Hutchinson on bass and Ricky Fataar on drums. In place of Jon Cleary, Mike Finnigan supplies the keyboard work which augments the band's sound.

A Reggae take on the recently departed Gerry Rafferty's "Right Down the Line" looks like an odd choice on paper, but this track is a standout on an album with no weak ones. Randall Bramblett's "Used To Rule the World" is the type of uptempo funky number that showcases Bonnie's slide guitar, and the underrated fretwork of Marinelli. Bonnie is especially effective on the Dylan songs, with accompaniment from jazz guitarist Bill Frisell. Al Anderson of NRBQ fame contributed three songs to this project, and his guitar duel with Bonnie on "Split Decision" adds to the album's overall jam vibe.

As many of Raitt's releases the sound quality is fantastic. Her voice is warm and guitars tingle while the bass and drums round out the bottom. The mix is airy and moderately wide providing plenty of room for the various instruments to carry themselves. Hi-fi enthusiasts will want to pick up the vinyl edition!

Stereo Vinyl or a Compact Disc.