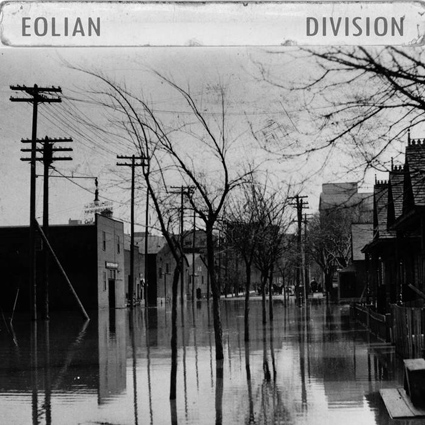 Producer, songwriter, and musician Ian O'Dougherty is the brains behind Eolian, the group that created a new song every week for 52 weeks in a row back in 2019. The groups latest release “Division” was conceived out of an ice storm that knocked out power in various areas all over North America for several days in March 2019. During this time, those who were affected, including O'Dougherty, slept sundown to sunrise, yet just across the street the power was never lost! Then a year later on March 12, 2020 the pandemic caused a local and global lockdown. O'Dougherty comments, “We saw a division of society, ethics, access, belief, and sides. The house across the street faced eviction.” These songs on Division came from those times. In this album there is a storm, a power outage, divisional experiences, and a switch of power. When access to power is shared, a spark starts a fire that burns on both sides.

Of late O'Dougherty has been releasing a plethora of surround sound music, including six albums culled from the 52 songs written and released during 2019. This all new album has been simultaneously released as a high resolution 48Khz / 24-bit stereo download and 96kHz / 24-bit 5.1 surround FLAC version, all on the Eolian BandCamp page.

The true fascination is revealed on these 14 creative immersive mixes of the core album along with 8 additional instrumental versions. The opening track “Welcome” finds percussion beating from the rear channels, with vocals and guitars emanating from the front speakers, along with synthesizers adding their gentle sounds all around the sweet spot. I rather like how the guitar reverberates to the back right channel and parts percolate from different corners throughout the piece.

“Mayday” makes excellent use of the center channel with chunky guitars surging out into the room and vocals floating across the soundstage from all four corners, while the band plays around the sweet spot. A fun aspect for ear candy fans like myself is the zingy guitar that fades in and out quickly crossing from the left to the right channel several times yielding a wide separation, accentuating movement and distance.

Each of the songs are relatively short, about three minutes each, promptly creating a theme and moving through the various sections with an absolute musical mastery. Pulling from the 60s psychedelic, 70’s progressive and art rock, plus on to the later years of alternative rock and beyond Eolian has formed their unique style of music that follows in the footsteps of bands like XTC.

While there is much intensity throughout the album, there are also stripped down pieces such as “To See You,” which features solo vocals soaring from the center channel and acoustic piano that spreads across all four channels giving an extremely open feel to the instrument. I felt as if I was sitting in a parlor with Eolian performing this song right in front of me. I hear the reverberation against the hard walls and wooden floors, making it a very intimate song. Still the song opens up further near the end with harmony vocals pouring in from the back channels turning into a call and response as he sings, “I can’t wait to see you.”

The crafty use of the surround scape continues throughout with nice accents such as the pattering snare drum that hits around in a circular motion at the end of “The Same.” The raw energy of the music and recording provide a club like feel directly immersing you in your listening room.

Chill out to the instrumental versions of eight of the songs contained on the vocal part of the album. These versions add a lightness and offer a refined musical listening experience that is entirely unique from the vocal versions. One may even find themselves preferring these alternate versions due to their transparent feel. I found that some parts that were masked slightly by the vocals became very evident, bringing a new dynamic to the song that I missed at first.

Recommended for surround sound enthusiasts, collectors of art rock and psychedelic music, plus all fans of Eolian and the works of Ian O'Dougherty.