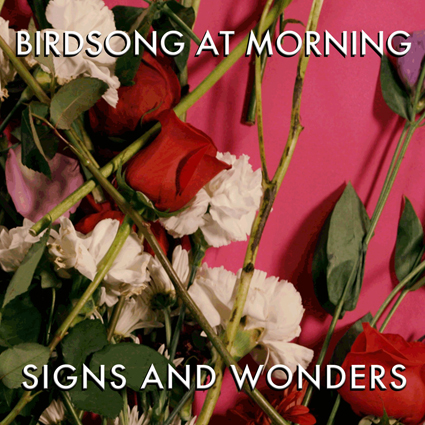 When I first heard of the quiet New England based band “Birdsong at Morning” it was a recommendation from another surround sound enthusiast. I immediately picked of a copy of their 2015 sophomore release “A Slight Departure” which contains a masterfully recorded collection of modern folk-rock songs available in 5.1 surround sound. At the time I wasn’t aware of their 2011 ambitious debut 4-CD box set, “Annals of My Glass House”, which began as an exercise in resurrecting long dormant musical energies. Jumping forward to 2018, the band led by singer/songwriter Alan Williams, with guitarist Darleen Wilson and bassist Greg Porter, has released their new album, “Signs and Wonders,” which weaves a tapestry of elegant words and melody together to form their engaging blend of art rock music.

The band finds themselves part of a growing community of artists and musicians who are inspired by heritage and the spirit of renewal, which they prominently display in many of their videos. Porter was a founding member of “Talking to Animals,” before playing for Aimee Mann and Patty Griffin, while Wilson established herself as a groundbreaking recording engineer in Boston, working with a broad spectrum of artists from punk (Salem 66), to pop (New Kids On The Block), before becoming the pre-eminent producer of New England singer/songwriters: Bill Morrissey, Patty Larkin, Catie Curtis, and Chris Smither.

While forming Birdsong at Morning, Williams embarked on simultaneous careers in music production and academia. While serving as musical director for Dar Williams and engineering several records for Patty Larkin, he earned a PhD in Ethnomusicology from Brown University. He is currently Chair of the Department of Music at the University of Massachusetts Lowell, where he also serves as the Richard and Nancy Donahue Endowed Professor of the Arts, all while maintaining a presence as a creative, performing musician.

Still, what is so remarkable is the bands detail to every aspect of their work, I have rarely seen DIY projects excel to create such a top-notch quality product. The band releases its own records, designs the packaging, and ambitiously records and mixes a 24bit / 96k 5.1 version found on the Blu-ray. Audiophiles will be pleased to know that both DTS-HD Master Audio surround along with LPCM 5.1 are embedded on the disc, alongside a high resolution stereo LPCM layer. Following in the footsteps of other great artists, instrumental versions are also available in all of the above formats too.

There are some very subtle differences between the DTS-HD MA and LPCM 5.1 versions, the most obvious is a slightly elevated volume level on the LPCM codec. To the majority of ears these will sound completely identical, as the balance and timbre have no apparent difference. But, I found I preferred the LPCM layer due to a slightly better channel separation and what I felt to be a more defined soundstage. Thus the comments below are based on the LPCM codec.

I immediately noticed the splendid dynamics that slowly rose on the opening track “Waterfall.” The relatively immersive mix follows the modern path with the bass, drums, and vocals up front. Secondary guitars melodically play from the back right channel, with synth pads floating behind the sweet spot. As the piece builds, strings heavily extend in the rear channels leading into a ripping guitar solo that sizzles from the front center. The clarity throughout is exceptionally pleasurable, yielding no unwanted distortion while eloquently reproducing the music.

Audiophile purists may resist watching the videos that accompany each track, however for feasters of imagery Birdsong at Morning delivers a magnificent Chef’s delight of tasty treats. The title track opens with resonant bass, accompanied by drums and guitars that fill the room. Each part has been masterfully recorded with complete transparency and a natural aural component that gives a real sense of the musicians being present in my listening room.

There is so much for me to love about Signs and Wonders that it becomes hard to quantify just how incredible this release is. The bands musicianship is spot on, carrying their elegantly written and arranged songs across the 11 tracks. Yet, an air of familiarity absolutely struck me as I tried to place their ballad rendition of Supertramp’s “The Logical Song.” This unique approach to the progressive rock classic shed an entirely new way of hearing an old favorite. The immersive nature of the surround mix shines through no matter how stripped back the parts are, absolutely engaging as the piece elevated to the instrumental outro.

There is a general consistency to the bands sound that lightly places many of the parts into a lush open space with subtle reflections that permeate across the sound stage. Each breath of the voice and pluck of the strings can be heard, giving this recording such a very lively feel. It is a pure joy to be bathed in such brilliance and clarity, all perfectly balanced and spaced to perfection across the multi-channel mix.

For the stereophiles among us, the soundstage is wide and deep. Unlike some other two channel mixes, I didn’t find this too be muddled, with plenty of air and a fabulous balance that makes this a worthy contender to the 5.1 mix. Listeners will find that enjoying this album in both formats is truly amazing.

For the techie geeks, I found the authoring of this Blu-ray to be one of the best I have seen to date. Over a decade ago when I went to CES in Las Vegas, I recall seeing the merits of Blu-ray discs, which allowed for instantaneous change between video views, credits, and the like. Birdsong at Morning has incorporated these techniques extremely well by providing access to the menu to switch between video and lyric view while the music seamlessly plays. Likewise, fans can read the on screen credits, and change between any of the six layers, practically without loosing a beat, except for the momentary silence as the new audio settings are engaged.

Signs and Wonders is a must have for folk-rock fans and collectors of surround sound mixes. The stellar audiophile recording is a wonderful addition to any audio enthusiast’s collection, along with those who enjoy engaging music that is relaxing and simply emanates incredible sound quality. Limited distribution, available at the links below.