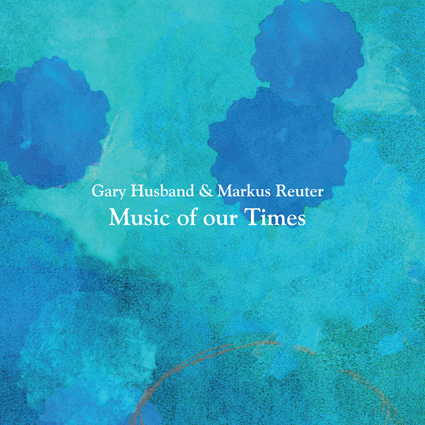 Stepping into the atmospheric wetlands that cross between the improvised and avant-garde genres, two brilliant musicians come together making a unique mark with their timeless effort. On this 2020 album “Music of Our Times,” Pianist Gary Husband renders a discrete sonic experience alongside touch guitarist Markus Reuter as they take an impromptu journey that is both uplifting and relaxing. Fans of Brian Eno’s “Thursday Afternoon” and the various Frippertronics releases will easily fall into the spell of this multi-phase superb sounding release Produced by Markus Reuter and Leonardo Pavkovic

Born out of their temporary stranding after performing only one show in Japan, with the remainder of the tour with Stick Men abruptly cancelled due to Covid-19, a plan-B was quickly crafted. They found refuge at the NK Sound Studios where they embarked on a candid and unrehearsed session. As they melded minds and bared their souls, Husband and Reuter uncovered their fluid connection.

Inspired by the studio’s remarkable Fazoli Pianoforti grand piano, Husband dug deep into his unique musical genius all while Reuter became the perfect complement, synchronizing in effortless perfection which has been captured and remixed into multiple versions as 96kHz / 24-bit downloadable files.

I originally listened to the outstanding stereo mix created by Markus Reuter, and will get to that later. As a multi-channel audiophile, I am perpetually fascinated with immersive mixes and how audio engineers creatively use the space. With only two instruments sourced from a live studio session, my curiosity was peaked how these would be placed into a surround setting that is both revealing and immersive. Mixing engineer Jan Printz has stretched the piano across the front three channels with significant long decaying reverb accentuated from the back channels. I noticed that the upper octaves are often emanating from the center channel with a striking clarity, while the remaining keys fall to the left and right. However, while this provides for a revealing central focus on the surround mix, the balance feels more musical on the quad version in my listening environment.
As an ambient pathway of melody an openness is formed on the first piece, “Colour Of Sorrow,” a rumbling spreads across the back channels as it slowly elevates and falls back down, even fully disappearing at times. This effect which has been introduced by Reuter is just one of the several elements that become layered into these improvisational pieces. Reuter blends ambient guitar parts which riff from the front speakers, and then in turn reverberating across the four main channels.
Throughout the album the piano tingles with a shimmering brightness, falling across the soundstage in a completely transparent elongated echo. On “Across The Azure Blue” this has been taken to another level during which Husband’s piano is heard in the distance behind the sweet spot at various moments. This shift feels completely natural, and absolutely adds a beautiful layer of depth to the soundscape. Meanwhile, Reuters guitar structures across the space with reflections bouncing from left to right, creating a bigger than life aural sensation.

Hats off to the session recording engineer Neeraj Khajanchi and Assistant Hirokazu Kobayashi who brilliantly captured these two fine musicians with outstanding clarity and free of any noticeable distortion. The vast emptiness that spans much of this sustained filled music has been further enhanced by the warm reverberant space which gives an appearance of being in a large cave or cathedral. Regardless of the quad or surround version, listeners will find themselves bathed in reflective audio ecstasy.

Of course, it would figure, my favorite track is the title track “Music of Our Times” featuring very crafty use of the surround space. The mix absolutely elevates this masterful piece featuring a swarming sound that moves from the back to the front channels, traveling around as it finds its way across the room. This effect could just as easily be interpreted as a sleek modern train smoothly zipping around, or any other number of buzzing like sounds. No matter your perception, there is a sublime vivid texture that comes across with a smooth sonic tone. I find that the movement energizes the piece all while the scurrying piano rapidly arpeggiates patterns from the front speakers. Dynamics truly shine here as the music elevates and falls in intensity. This is certainly the kind of music that will take one on a journey, and is perfect for moments of relaxation.

Throughout Music of Our Times there is such an obvious chemistry between the artists, which seemingly has been accentuated by their reverence of the musical moment at hand. One may even wonder if they have developed telepathic capabilities given the depth of their interplay. The expansion into the multi-channel realm has given this album two additional versions, both a 4.0 quad and 5.1 surround. I found I preferred the quad version over the surround since it felt more cohesive musically. However, I rather do like how there is a punch from the center channel on the surround mix, and as rooms and systems vastly differ enthusiasts may just as easily find their preference to be the surround version.

As one would expect, the stereo version drastically loses the spatial depth when compared to the quad or surround mixes. However, I still found this mix to be exceptional and through treatments in the mix there is ample depth, and even moments when elements seemingly came from the side and behind me. Also, while literally sourced from the same multi-tracks, I did sense a slightly zippier slew to the striking of the keys on the stereo version along with an absolutely pure imaging across the stereo field. Naturally, some aspects have been relocated between the left and right channels, but nothing is lost here other than the multi-channel depth. The richness of the piano and vivid overtones that follow are magical making this an amazing version, especially for stereophiles. Like the quad and surround versions, it is available as a 96kHz / 24-bit download, or on Compact Disc.

I admit Music of Our Times may not musically be for everyone, but certainly ambient and avant-garde fans will want to take notice. Only a bit of dissonance is present, making this a very melodic and often times uplifting listen. Personally, I seek out special albums like this, and even of greater interest to me is the excellent surround and quad mixes that encompass the listener.  NOTE:  The Quad and Surround mixes are exclusively available through Surround Music One, while the high resolution Stereo edition or Compact Disc are available through MoonJune Records BandCamp page.