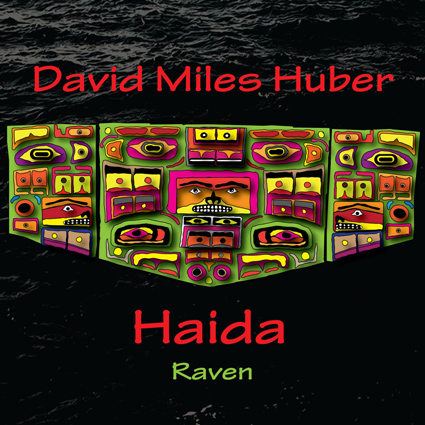 When I was first introduced to the music of David Miles Huber over a decade ago, he was already on the cutting edge of the emerging Auro 3D surround codec and making use of the recently available High-Fidelity Pure Audio Blu-ray physical media format. The multi-Grammy nominated artist remains in the forward-looking camp with his 2019 release Haida (Raven) by meeting listener demand for FLAC downloads, thus he has mixed the surround version of Haida (Raven) in 96kHz / 24-bit discrete 5.1, instead of his customary 7.1 format found on earlier releases. Additionally, the 2.0 stereo mix makes use of the Ambeo Sennheiser Orbit plugin, which emulates the binaural characteristics of the Neumann Fritz Kunstkopf. This enables specific frequencies to be panned at various locations in the 360 degree sound field, which translates well on both headphones and stereo speakers.

Haida (Raven) is the first part of a thematic concept double-album that was created over the past three decades, with the second part Haida (Dreamcatcher) due for release in July 2021. Designed as a voyage, a reminder that we are connected, not only to each other, but to the land, the vision is to portray the beauty, majesty, and power of the land of the Northwest Territories that stretches from the Puget Sound of Washington State, north to the Queen Charlotte Islands of British Columbia. It depicts the deep waters, soaring eagles, snow-capped mountains, and lush forests in this vast region.

It is the immersive tour-de-force that Huber creates with his unique style of production and mixing that keeps me coming back for repeated listens. Providing a natural and expansive soundstage, energized, and balanced out with lush beats, synthesizers, and live acoustic instruments that are combined to create a “Zen-meets-Tech Experience.”

From the moment the first track “Scotchbroom” starts on the album Haida, listeners are immersed with sound emanating from all corners of the room. Huber places an acoustic piano upfront between the left and right channels and accents the depth of the mix with a quasi beastly effect that crosses from the right back to the left back channel. In a very slick way these growling noises also move forward and back between the front and rear channels, absolutely providing a fantastic sense of spaciousness in the mix. Droning tones continue to penetrate from all directions, grinding deeply into the subwoofer, and the piano then shifts into the rear channels as tribal rhythms are introduced upfront, leaning a bit toward a techno beat. Rich vocals pour from the center channel as the peace forges on, and there is much more to the mix than I am even letting on, it is magnificently filled to the brim with aural ecstasy.

Sonically the FLAC download is outstanding, with awesome separation and a resilient top end plus a robust bottom. There is a delicate transparency across all of the instrument, yielding a delicious clarity, which one should expect from high resolution recordings at this juncture in modern times. The second track “Fiveflute” has a cool rhythm pattern using a shaker like element that moves across the front channels and even dances back into the rear channels from time to time.

For those familiar with the Jean Michel Jarre’s “Zoolook” album, it is easy to find some similarities with the vocals and rhythmic patterns on Haida (Raven). Having said that though, this first installment of the double album is still a distant relative to Zoolook, it is extremely unique, while carrying some of those genes from Jarre’s work a couple of generations back. Huber has taken a true Zen approach to this release, allowing the album to be extremely meditative. What is truly inviting for audiophiles is how Huber makes use of dynamics, including subtle changes in volume, pushing elements forward and back in the mix, driving the intensity of the songs. Furthermore, the quick onset and decay from peak to valley are so apparent with percussive elements, that these suddenly add incredible weight at any moment throughout the mix.

Incorporated within the eight pieces on the album are sounds of whales along with ocean waves aiding in aurally describing the region where the story takes place. As the album culminates, listeners will likely find a sense of home, as the music fades into the distance.

Haida (Raven) is an absolutely fantastic release that is extremely immersive in surround. Plus, stereophiles can still dig into the dept when listening to the 96kHz / 24-bit stereo embryonic version. However, for me the depth that is described does not appear so evident, which has been the same for other releases I have experienced in the past using similar 3D formats. I must admit that I think that this can work very well for many listeners, while for others like myself, for whatever reason it just does not seem so apparent. Thus, your results are likely to be very different, regardless the great news is the stereo mix sounds fantastic and carries the same incredible solid fidelity as the surround mix. Sure, it lacks some of the depth when compared to the surround mix, but it is a very worthy version for stereo audiophiles. The FLAC downloads are available in surround at Immersive Audio Album, and the stereo embryonic version is available through BandCamp at the links below.

Musically this is a very consistent album that is best for fans of ambient and downbeat techno, plus perfect for those seeking to zone out. Collectors of surround sound music absolutely will want to pick this up to experience the immersive mix which has a plethora of remarkably interesting sonic tricks.

It is worth noting that a Blu-ray edition will be released soon, containing both parts of Haida, including the Raven release as reviewed here, plus the Dreamcatcher release scheduled for July 2021. Check back for an update on this double disc format release in the near future.