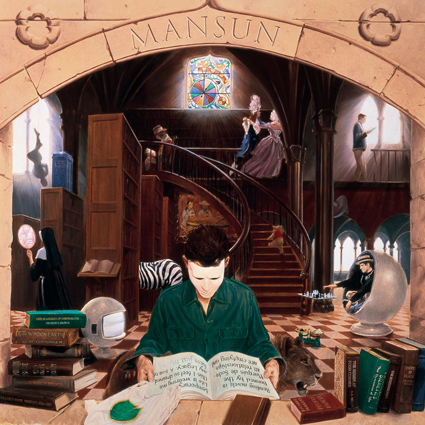 Shredding the expectations formed from Mansum’s smashing 1997 debut “Attack of the Grey Lantern,” this 1998 sophomore release titled “Six” finds the band in a more experimental creation which instantly became a cult classic. Now, a deluxe 3 CD and 1 DVD limited special edition of their infectious and audacious “Six” has been remastered from the original master tapes by Jon Astley. The compact discs feature the complete album, a disc of demos, rarities and outtakes, plus the B-side album “The Dead Flowers Reject. The best part is the DVD which contains the album's first ever 5.1 surround sound mix available in DTS 48kHz / 24-bit and Dolby Digital AC3 by long-time collaborator P-Dub that are so darn enticing. Also 2.0 enthusiasts will find a hi-resolution stereo 96kHz / 24-bit LPCM audio version along with the original promotional videos. The set contains a 48-page hardback book featuring sleeve notes by journalist and long-time fan Paul Lester, and insights from band member Paul Draper.

It is the unification of a plethora of ideas integrating elements of Pop, Electronica and Progressive Rock, along with a Tchaikovsky sample interlaced with electronic drums and spooky synth lines that take Six into a new direction. Listeners will hear references to religious skepticism, Winnie the Pooh, Marxism, Stanley Kubrick, and spoken word from the legendary fourth Doctor Who, Tom Baker.

The dynamic and varied approach heard on Six often switches mid-track to seemingly new songs, branding the album an extraordinary statement of ambitious individuality. Fans will find the singles “Legacy,” “Being a Girl,” “Negative” and of course “Six" within this release.

From the surround perspective the album eases you into an immersive space. The opening title track powerfully captivates my attention from the front channels with the back channels primarily handling ambience. But, don’t let this soft entry into 5.1 sway you away, since the back channels come to life only moments later.

Drums have been powerfully mixed upfront throughout the album, with a solid kick drum that plays off the resonant base. Guitars jingle and jangle with excellent clarity stretching across the front speakers and take on many tonalities as they set the mood of each track. The band makes heavy use of effects which create a very deep soundstage and provide a wide range of colorful palates that build the texture for each song. These nuances are all easily heard clearly ad I feel that the studio mix has truly been transferred into my listening space.

Lead vocals have been placed in the center channel along with the kick and snare drum, plus the bass gains focus here too as it spreads across the left and right front speakers. As “Six” spins on take note to the hip part wherein squashed vocals emanate from the front left channel and then are slightly delayed to the back rear channel, providing excellent use of the back channels to open up the mix and immerse the listener all while creating a fun surround mix

Admittedly there are moments on the album when parts feel like they are on top of one another, however this is clearly by design, as the music does change from one style to another opening and constraining the mix. Yet, one thing that does stay consistent is the overall sound quality which is very good. Sometimes I may desire greater dynamics, however there is plenty of punch and a massive amount of channel separation that aid in creating a wide soundstage and an immersive listen.

“Shotgun” is a surround enthusiasts dream come true with back speaker action that surpasses many of the 5.1 discs in my collection. Effects waver across the rear channels while the fronts pick up the reflections and the band plays on.

There is no reason to play the AC3 codec if your system supports the DTS codec. The AC3 version lacks the lows and slices away at the top end along with compressing the overall sound. However, the AC3 version is not a train wreck and is passes the bar for surround listening. For stereo audiophiles, the LPCM 96khz / 24-bit 2.0 codec is wonderful, providing for a realistic listen to the album. It enhances the lows to highs when compared to the surround mix, but of course it has been flattened and doesn’t seem to offer as deep a soundstage as I have heard with other stereo mixes.

I wish the Dead Flowers Reject b-sides had been included on the DVD in hi-res, as they are of great interest and well worth checking out on the third CD. Also don’t miss the demos, rarities and outtakes on the second CD each which wrap up this box set along with a couple of promo videos on the DVD.

All in all, Six is a compelling package that is a must have for Mansun fans. Followers of alternative rock, progressive rock and psychedelic likely will want to add this into their collection. Surround sound enthusiasts will find themselves easily immersed and satisfied with plenty of ear candy that makes the 5.1 mix an engaging listen. Miss it at your own peril, as I doubt a reprinting of this limited edition would ever happen.