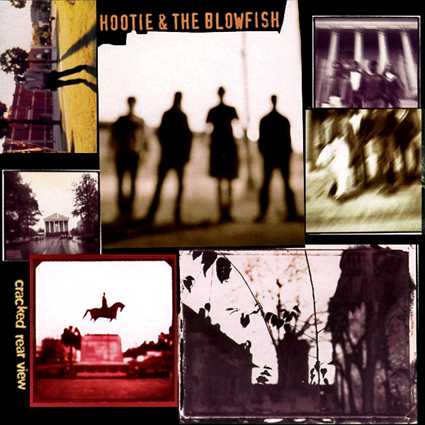 Celebrating the 25th anniversary of their debut album “Cracked Rear View,” Hootie & the Blowfish has released a new deluxe edition set that contains 3CD’s + 1 DVD with a 5.1 Dolby Digital AC3 48k surround sound mix of the album, a 96kHz / 24-bit LPCM stereo mix, five bonus stereo only tracks and the original music videos available both in surround and stereo.

Cracked Rear View is one of the biggest selling debuts of all time, clocking up over 14 million sales since its release in July 1994. Across the pond, it remains their most popular album in the UK, reaching number 12 on the British charts and managing a respectable six months in the Top 100.

The Don Gehman-produced album hit high up on the Billboard lists with the David Crosby song “Hold My Hand,” plus “Only Wanna Be With You,” “Time” and the Grammy-winning “Let Her Cry.”

Among the unreleased and rare material on this Rhino box set, there are also early versions recorded in 1990 and 1991 which were previously only available on cassettes sold at their live shows as well as the band’s five track 1992 Kootchypop EP. Plus, fans will also find a live recording of the band’s February 3, 1995 concert at Nick’s Fat City in Pittsburgh, PA. Recorded just a few weeks after Cracked Rear View was released.

This is a nicely packaged deluxe edition which is well deserved for such a well known and commercially successful album. I am delighted that the label didn’t dig deep into fans pockets with the inclusion of unwanted vinyl and oversized hard cover books. However, this is where my praise begins to wane. I must first say that the 5.1 mix is rather good, pleasantly immersive and opens up this classic alternative rock album. Yet, the elephant in the room is the sad truth that the DVD only contains a Dolby Digital 5.1 layer, which basically sounds terrible. Just go and compare the depth, color, dynamics, and clarity of the LPCM 96k Stereo layer to the pitiful Dolby Digital layer and one can very easily hear what is lacking on the surround mix version!

Let’s talk about the mix for a moment, lead vocals penetrate from the center channel and spread across the room to the back channels. What I really like is the backing vocals pop from the rear speakers, reflecting back up front, providing reverse depth to the mix. The core rhythm parts naturally fall up front with the drums spreading from left to the right and bass holding down the middle. Guitars pour from both the front and back channels, primarily with secondary riffs falling behind the sweet spot. Organ seemingly comes from the rear, but floats into the middle a bit, making this a moderately immersive surround mix.

While I generally like the separation, the brittle sound just kills it for me. Cymbals are edgy and the snare has become a thin snap that lacks punch. Even the guitars sizzle and maybe the most natural elements are the vocals and organ parts, although they lack real depth. The bass is especially lacking, requiring me to increase the sub-woofers volume, which in turn really filled out the low end dramatically. Thus, some tweaking apparently is in short order to actually appreciate a somewhat improved sound quality when listening to the 5.1 mix.
I am sure back in the day when Dolby Digital was first released it was hailed for great sound quality. However, with the advancement of Lossless codecs, including Dolby True HD and DTS Master Audio, it is difficult to go back several steps. From my perspective it seems truly ridiculous to release music in anything less than those higher quality formats, excepting the knowledge that there are audio enthusiasts who still haven’t upgraded to a Blu-ray player yet. So, providing at least a DTS 96k/24 version along side a Dolby Digital AC3 on a DVD is a good compromise in my opinion.

Now, this disc offers a good ear training tool for high resolution audiophile newbies. Go ahead and switch to the 96k / 24-bit LPCM stereo layer and hear the vast difference in sound quality. Yes, I know the sound field is flattened, but pay attention to the robust snare drum that actually has dynamics and punch, along with the cymbals and hi-hat that now sparkle instead of the splashy edginess heard on the compressed multi-channel mix. The guitars are richer and even more airy, although they are blended across only a stereo field. Even the vocals are significantly more natural, allowing for breath and depth to shine through. All of these aspects should have been part of the surround mix, but sadly have been lost in the downgrade to the Dolby Digital codec. Thus, the gem in this package is actually the LPCM Stereo mix.

As a bonus, fans will find five additional B-Side tracks that are available on the DVD in hi-res stereo. Plus, there are five videos that contain the surround and stereo mix, albiet still only in 48k Dolty Digital.
I can only recommend this deluxe edition for Hootie and the Blowfish die hards, and audiophiles who are willing to forgo the 5.1 mix in favor of the 2.0 LPCM layer. Surround fans should only pick this up out of mere curiosity of the 5.1 version, but certainly not for sound quality! Meanwhile, I can only hope for another release that contains a better quality surround codec down the road. In short, you are advised to wait, unless you must have this now.