The Pineapple Thief – Where We Stood - DVD 5.1 reissue review 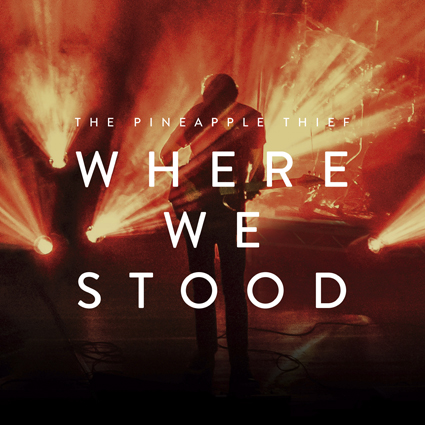 When I first reviewed “Where We Stood” a couple of years ago I noted that I felt it was a perfect follow up to The Pineapple Thief’s 2016 release “Your Wilderness,” which made waves in the progressive rock world. Now in June 2020 reissue fans can experience the band’s London show from that album tour, and K-Scope has released it in a couple of different options, including a CD + Blu-ray edition and an audiophile 180g double vinyl edition. Obviously, to get the full impact of this stellar show you will want the CD + Blu-ray edition, which contains video and immersive 5.1 surround.

Assuming it is identical, let us try to sort out the myriad of programs found on the Blu-ray, which boots up to the concert film that includes interviews spliced in. This is great for at least one viewing, and the audio can be heard in either stereo or surround, but not the discrete surround mix. We will focus on the audio after a few words about the high definition video. The video quality is absolutely fabulous with plenty of contrast and deep blacks. Although I am still a bit old school when it comes to concert footage, the moderately fast paced cutting works extremely well, providing plenty of attention for each musician. You will see incredible closeups of Soord’s guitar work and Harrison’s drumming, plus shots of the remaining members of the band. Medium shots move along with the music and long shots give viewers an audience perspective from several rows back, which also include audience shots too. Plus, check out the drums cam that is directly above Harrison at times, giving viewers the chance to see him go to town on the set. Strewn throughout this chapter are interviews with the various band members where they talk about the band’s name and history, plus plenty of jabs they make at each other. This breaks up the concert causing it to feel more like a documentary.
Thus, it is the concert only that has received repeated listens from me, losing the interviews and carrying through with a fantastic set by Pineapple Thief. Plus, on this chapter there are three audio options, all in 24 bit / 96kHz, each with stellar sound quality and emphasizing their unique characteristics. Listeners can select a stereo or 5.1 surround mix that is natural and really places them into the concert hall, especially the multi-channel mix. The third option is a discrete mix that emphasizes the various instruments, especially guitars, drums, and vocals. Although it lacks much of the live hall ambience, parts really pop out and use of the rear channels is satisfyingly defined for those seeking an immersive experience. I cannot even say which mix I prefer, as each truly provide an excellent aural experience.

I found Soord’s vocals and acoustic guitar skills to mirror the studio recordings and are distinctly crisp and clear. I especially like the shimmer of the acoustic guitars and bite of the electrics throughout the show. Sykes’s bass and Kitch’s keyboard work spool out lots of grooves and ambient accents with bass placed up front and keyboards typically moved into the rear speakers on the discrete mix. Charles weaves his tight guitar soloing several times throughout the night, pushed forward in the mix with glistening brilliance. While Bruce Soord mixed the overall surround and stereo mixes, Gavin Harrison balanced his methodically off kilter drum work with absolute precision. Each element of the kit strikes evenly with a refined clarity where the nuances of the intricate rhythms are so easy to hear.

The show includes a generous helping of songs from their most recent studio release “Your Wilderness,” as well as some fan favorites from their discography. Audience interaction is good, dynamics are particularly good, and generally I would give high marks to the overall sound and picture quality. There has been so much included on the Blu-ray release which makes this a great value for fans.

When Your Wilderness was released in 2016, a deluxe 3 disc deluxe edition exclusively contained the album in 5.1 surround, along with a bonus ambient piece titled 8 Years Later. These have now been included on the Blu-ray of Where We Stood, along with alternate acoustic versions of songs from the Your Wilderness album.

Please read my earlier review about the hi-res surround version of Your Wilderness, although note that the Blu-ray contains DTS HD MA 96/24 in both 5.1 and PCM 96/24 2.0 version, each an improvement over the DVD previously reviewed. Now let us continue with the other bonus content on this Blu-ray disc.

Still assuming the Blu-ray is identical to the 2017 edition, a super bonus is the hi-res version of 8 Years Later, which is also presented in DTS HD MA 96/24 5.1 as well as a PCM 96/24 stereo option. The seven part suite has been newly remixed to surround which makes moderate use of the rear channels for secondary parts along with ambience. This sure beats the CD only version contained in the deluxe Your Wilderness box set, and only adds the superb value of the Blu-ray of “Where We Stood.” Mostly an ambient groove piece, 8 Years Later places the listener into the zone sparsely incorporating vocals while really providing a chill vibe. None the less, this has been cleanly recorded and while it lacks the perfection of their studio album and concert contained on the other titles on this Blu-ray, I absolutely enjoyed the downbeat vibe.

Still, the Pineapple Thief refuses to be outdone when it comes to content inclusion, adding another five tracks that are acoustic versions of songs from Your Wilderness. Once again these have been mixed in DTS HD MA 96/24 5.1 and PCM 9624 stereo. As a guitarist myself, I found these to be a fantastic inclusion, stripping down the textured full band to acoustic guitar and vocals. Don’t’ expect much from the multi-channel surround mix, even with the addition of the piano parts on No Man’s Land and other tracks, the front channels get the focus, with lovely reflections emanating from the back channels. Yet, these are eerily beautiful renditions of these songs, and I certainly prefer the defined space of the 5.1 mix.

Let us hope that the bug I noticed when trying to exit a program already in progress has been corrected. On the 2017 edition my attempts to return to the main menu repeatedly failed, and I only could resolve this by reloading the disc. A minor annoyance that will unlikely effect most users, and of course could be related to my universal player.

If it has not become clear yet, the Blu-ray is the definitive edition of material related to “Your Wilderness.” This “Where We Stood” release brings so much to the table at such a friendly price, making it a must have at multiple levels. Now with the addition of the CD, you most certainly should buy copies for all of your friends, it is a great concert and album, making it a perfect gift. Surround enthusiasts absolutely will want to jump on this train, as there is plenty of ear candy that will provide hours of listening pleasure.

Out of date links, please check back: